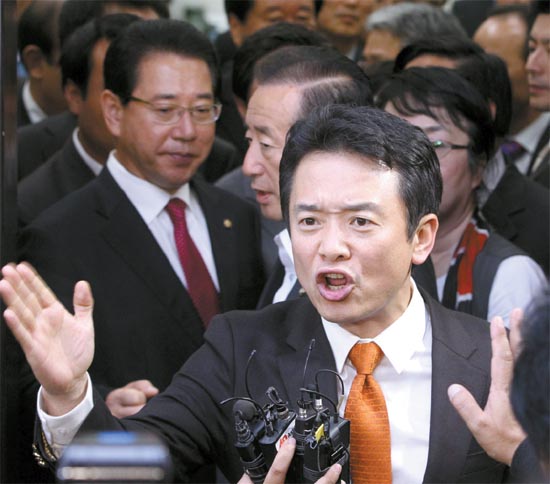 Representative Nam Kyung-pil, chair of the Foreign Affairs, Trade and Unification Committee, yells at opposition lawmakers for physically blocking GNP lawmakers from holding a committee vote to advance the FTA to the full National Assembly. [YONHAP]


Round-the-clock negotiations between the Grand National Party and the Democratic Party to pass the Korea-U.S. free trade agreement broke down last night after DP lawmakers rejected a hard-won compromise reached by party leaders and physically blocked GNP lawmakers from holding a committee vote to advance the pact to the full National Assembly.

Although no violent scuffles broke out, the continued confrontation between the ruling GNP and the opposition DP put a serious damper on the Lee Myung-bak administration’s goal of putting the FTA into effect starting next year.

The National Assembly is to be in session on Nov. 3, 10 and 24, and it remains to be seen if the ruling party will railroad the bill through later this week using its large majority.

Nam then announced that there would be no committee meeting.

“I don’t want to risk a violent melee in order to have a committee meeting,” Nam said. “But this is not a democracy.”

The agreement was largely a concession to the DP’s demands for more compensation for farmers, fishermen, small retailers and small companies for expected losses once the FTA goes into effect.

The GNP also made concessions to the DP on the FTA’s provision on investor-state dispute settlement (ISD), the thorniest issue in the pact’s ratification that would give foreign investors the right to bring a dispute in Korea to an international arbitration panel. Democrats have said the provision would make small companies and retailers in Korea more vulnerable, while Grand Nationals have pointed out that the provision had been agreed to under the Roh Moo-hyun administration.

The floor leaders had agreed to approve the FTA as is, on the condition that Seoul and Washington would start discussing whether to keep the ISD provision within three months of the FTA taking effect. Within a year of the discussions, the government was to report to the National Assembly on the ISD provision, with the legislature deciding whether to keep the provision or not, the compromise said.

The compromise, however, was rejected by DP lawmakers after the floor leaders held party caucuses to discuss the agreement.

Democrats, after four and a half hours of internal discussions, drafted a counterproposal to pass the FTA without the ISD provision. They also required President Lee Myung-bak to meet with U.S. President Barack Obama to renegotiate the provision.

The GNP rejected the DP’s counterproposal.

“That’s not an alternative, but a perversity,” Nam said. “It’s only been a few days since the FTA was signed [in the United States], and it makes no sense to demand that the provision be excluded.”

Still, the floor leaders of the GNP and DP as well as Nam and the DP’s deputy floor leader began another round of negotiations yesterday evening on the ISD provision, but failed to reach a new compromise, eventually forcing Nam to cancel the committee meeting.

The DP’s change of heart appeared to be a move to satisfy minor opposition parties such as the Democratic Labor Party to keep the liberal alliance ahead of next year’s legislative and presidential elections.

First concluded in 2007, the FTA was renegotiated by the Lee and Obama administrations late last year. The U.S. Congress approved the trade deal on Oct. 12, and Obama signed it into law on Oct. 22.