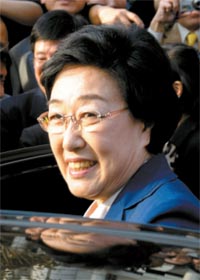 Former Prime Minister Han Myeong-sook was acquitted of receiving massive illegal donations, winning an 18-month court battle that was thrown into confusion after the prosecutors’ main witness recanted his testimony in the middle of the trial.

Han, who became the country’s first woman prime minister under the Roh Moo-hyun administration, was indicted in July 2010 on charges of receiving 900 million won ($812,700) from Han Man-ho, the former head of construction company Hansin Gunyoung.

Prosecutors had alleged that the high-profile liberal politician received money from the builder ahead of the Democratic Party’s 2007 presidential primary. Prosecutors had also sought a four-year prison sentence and a 940 million won fine for Han.

“The only direct evidence to prove her charge of receiving the money was Han Man-ho’s testimony during the prosecution’s investigation,” the court said in its ruling. “But there are parts that are factually wrong and inconsistent. And his testimony is unreliable because he could have intended to evade additional indictments by giving the testimony.”

The court also said that while prosecutors’ evidence could prove that Han Man-ho raised slush funds, it could not prove that the money was delivered to the former prime minister.

Prosecutors had built their case against the former prime minister based on Han Man-ho’s testimony, before he recanted his testimony midway through the trial in December.

“At that time I had no other option but to make a false confession under duress,” he said on the stand, baffling prosecutors. “I have never offered political funds to Han Myeong-sook.”

He later faced charges of perjury.

Han Man-ho was already in prison at the time of his initial testimony for other corruption convictions. Prosecutors launched an investigation into the allegation on April 8, 2010, only one day before the former prime minister was cleared of another graft charge.

She was indicted in December 2009 for accepting $50,000 in bribes from Kwak Young-wook, former CEO of Korea Express, but was acquitted on April 9, 2010. At the time, the Seoul Central District Court also questioned the veracity of Kwak’s testimony.

While prosecutors said they would appeal the ruling, Han’s supporters who were in the courtroom cheered after her acquittal was announced. She emerged from the courtroom and briefly addressed the press.

“This is a conviction against politicized prosecution,” the former prime minister said. “My acquittal is punishment for the ugly political plot created by the Lee administration and prosecutors. I hope the politics of shameful savagery ends today with my case.”

She also said that liberals must win next year’s presidential election to reform the nation’s prosecution.

“I will take a step closer to the public with new determination,” Han said. “A new wind is blowing in the political arena, and I will do my best to embrace this change and open the path for a victory.”

The 67-year-old politician and rights advocate was prime minister from April 2006 to March 2007. She unsuccessfully ran in the DP’s 2007 presidential primary. She was also the DP’s nominee for the Seoul mayoralty in the May 2010 local elections but lost to Grand National Oh Se-hoon.

Yesterday’s acquittal cleared the way for Roh loyalists to strengthen their power inside the DP. The Democrats will have their party convention in December to elect a new leadership, and Han is expected to run for the chairmanship.