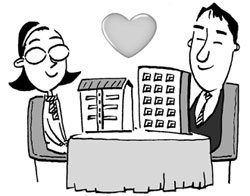 “Men dream of becoming Cinderella, too,” said a 31-year-old man who works at a securities firm.

Sitting at a Gangnam coffee shop on Friday afternoon, the man was there to meet a possible suitor, also 31 and also unmarried. Both were, above all else, looking to settle down.

“I’ve been ready to marry since I was 27, but because I was too picky, it didn’t happen,” the elementary school ballet instructor said.

But this was no ordinary date. He had a job but no deed to a house. She, on the other hand, had parents who owned a hefty real estate portfolio. 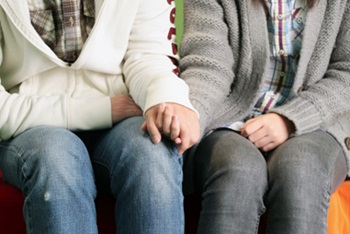 Call it role reversal, call it modern Korea, but one matchmaking agency has seemingly tapped a previously unheard of market: setting up men who don’t have homes prepared for married life with women who have the material goods.

The man and woman met at the coffee shop after being set up by the agency.

“Although we can’t let it on because of our pride as men, we have a desire for social leverage through marriage,” the man said.

His date was on the same wavelength. “Men who are highly qualified have high demands and can be tiresome,” she said. For a change, a man could be Cinderella and a woman the knight in shining armor.

In college, the man said he thought he would be able to save enough for a lease after working for three years. But with skyrocketing housing prices, he said that he came to realize the difficulty of doing so.

“These days, there are many competent women, and with men entering the workforce later because of military service, there is no rule that the man has to purchase the house,” he said.

Two weeks ago, the matchmaking agency had posted a bulletin for an event for single men and women in their 30s.

“While women have become more active in society and buy houses, there are many instances in which men cannot obtain jeonse [key money] and have to delay marriage plans,” the bulletin read.

In just two weeks, 160 men and 80 women had signed up. The event’s publicist, Park Young-sun, said the agency hadn’t anticipated such a high response rate.

“We were surprised that more people applied than we expected,” she said. “As women’s economic capabilities rise, leading to deferring marriage, their marriage priorities change as well.”

The man and woman met alongside another couple who had been set up by the agency.

She is a 36-year-old career woman with a deed in her name, thanks to money she had saved up and some help from her parents.

Her date was a 38-year-old man who works for a conglomerate and currently lives with his parents.

“I wasn’t able to save much because I was enjoying my early 30s,” the man explained. “If I get a loan, I might be able to come up with the money for a lease, but if the woman has a house, isn’t the starting line pushed forward?”

The woman, for her part, seemed to understand, suggesting that expecting all men to have a home could even be redundant.

“There is no reason for there to be two houses. Now, as long as the person is good and has a future, I don’t care,” she said. “It’s a situation where we both know that each other is lacking so no time has to be wasted.”

But even if the clock seemed to be ticking for them, there was still room for romance.

“Marriage is about two people helping each other, so it’s not important who is financially better off,” she said.