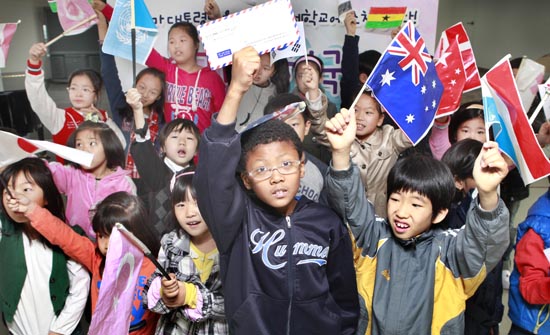 Hwang Sung-yun, center, whose father was Korean and mother Ghanaian, holds his letter to U.S. President Barack Obama on Friday at Global Sarang, a school for multiethnic children in Oryu-dong, western Seoul, before he mailed it to the White House. By Park Sang-moon


Ten-year-old Hwang Sung-yun has a mission.

“I want to meet Obama and shake his hand,” Hwang said. “I like him because he is black just like me.”

The fourth-grader at Global Sarang, a school for multiethnic children in western Seoul, sent a letter to the White House on Friday inviting the American president - and his role model - to visit his school.

Big hopes for a small child, sure, but Hwang has earned his right to dream big.

His Ghanaian mother died when he was seven of a brain hemorrhage, and his Korean father took his own life last year.

“I had known Hwang’s father, who worked as a day laborer, for a long time, and I heard he died,” said Kim Hae-sung, president and founder of the school. “Although Hwang has eight uncles, they told me that they couldn’t afford to raise him and his two siblings. So I decided to raise them.”

Last spring, Hwang was elected president of the student council, wowing his peers with his speech.

The logic in Hwang’s speech may have been straightforward, but the journey to uttering those words was anything but.

Originally enrolled at a standard public school, Hwang had been driven to depression and socialization problems, endlessly teased and harassed for his skin color.

But if anyone has navigated the difficult waters of being biracial in a homogenous society such as Korea’s, it’s Hwang.

“I am a Korean citizen who was born in Korea,” Hwang wrote in his letter to Obama, “but I don’t think people see me as Korean in their eyes. I speak Korean, eat Korean dishes and my father is also Korean. I think it’s apparent that I’m Korean, right?”

The letter continued, “But people don’t recognize me as Korean mainly because of my skin color. I had lots of unhappiness about my life, wondering why my skin color was different from others.”

Hwang’s letter, surprisingly mature for an elementary school student, also included some spunk: “I even learned taekwondo to beat those teasing me about my skin color.”

The letter was a result of a student council meeting. Hwang had moved to write a letter to the White House after hearing that the American president had once visited a string of elementary schools in the United States.

As an extra draw, Hwang convinced his peers to rename their school, if only unofficially, Obama School.

“We are sometimes discriminated based on our skin color but we want to be like you, Mr. President,” the letter added. “So we decided to name our school Obama School.”

Hwang wrote the letter in Korean and English with the help of his teachers. He tried to send the letter through the U.S. Embassy, but when the embassy didn’t respond to the request, Hwang sent it directly to the White House from a local post office.

If he has a future in public service, he’s off to a good start.

“I want to become a diplomat to help poor and suffering people in the world,” Hwang said.