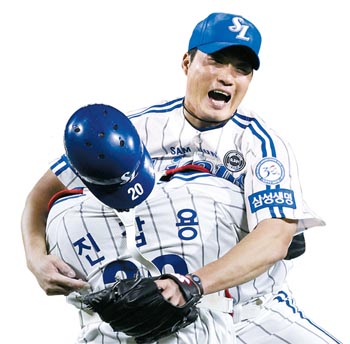 For Daegu Samsung Lions closer Oh Seung-hwan, clinching this year’s Korean Series title was not only a mission for his comeback, but also a promise to keep with his manager Ryu Joong-il.

Oh successfully sealed the 1-0 win against the Incheon SK Wyverns in Game 5 of the Korean Series to give the Lions their fourth crown. He was voted as the most valuable player of the series, which the Lions won convincingly 4-1.

At Jamsil Baseball Stadium in Seoul on Monday, the Lions closer raised both of his arms after the series’ final out, but he couldn’t enjoy a personal celebration for long as Ryu immediately rushed the mound.

“I was about to show my gratification, but the manager was already in front of me,” Oh said after the game. “I will do it at a ceremony next year.”

But for Oh, Ryu is not the manager who interrupted his celebratory moment, but a person to whom he pledged a top-notch performance.

Oh revealed that he made a promise to Ryu during preseason training in Japan that he would recover his form and help the Lions to win the title. The pitcher said that promise with Ryu was the motivator that pushed him this far and eventually led to his closing out the club’s first Korean Series victory since 2006.

“I really wanted to keep the promise that I made to Ryu,” Oh said after the game. “Everyone on the team helped me perform this well.”

The Lions’ victory on Monday also signified the return of the save king in the Korean Baseball Organization.

Oh, nicknamed “the Stone Buddha” for his emotionless face, has been regarded as the top closer in the KBO since his professional debut in 2005.

The 29-year-old closer recorded the most saves for three consecutive seasons from 2006-8. Oh also set the single-season saves record in Asia when he successfully closed 47 games for the Lions in 2006.

But Oh’s success skidded to a halt because of injuries in 2009 when he tore his right shoulder muscle. Last year, his woes worsened when he suffered a right elbow injury. He also watched his team get swept by the Wyverns in last year’s Korean Series.

This season, however, was different, with some pundits calling it Oh’s best season so far.

Throughout the season, Oh was the highlight of the Lions’ strong bullpen, which experts say was the key factor for the team’s title run. Even Ryu admitted that the best player on his team was Oh.

“I was worried how Oh would pitch this season after suffering big injuries,” Ryu said. “But our team became stronger with Oh.”

In the regular season, Oh tied his Asian single-season record in saves again with 47, while finishing with a 0.63 ERA. On Aug. 12, he became the youngest and fastest pitcher to collect 200 saves in Asia when he contained the Gwangju Kia Tigers.

His impressive performance had no breaks in the championship games. In this best-of-seven series, Oh bagged three saves which put him as the all-time saves record holder in the Korean Series with six.

With the “untouchable” performance, Oh got 46 of 66 MVP votes from reporters.

It was Oh’s second Korean Series MVP in his career after he received the award in 2005. Oh also became the fourth player in the KBO to win the award twice.