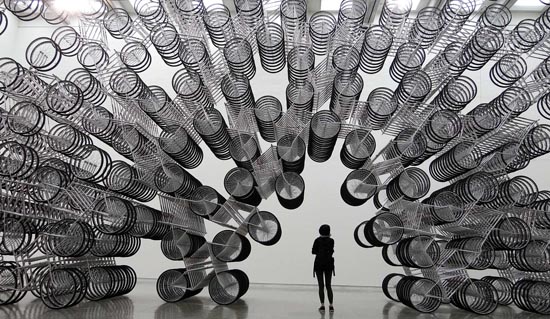 A woman looks at the installation “Forever Bicycles” by dissident Chinese artist Ai Weiwei during a media preview of his “Absent” exhibition in Taipei last week. [REUTERS]


TAIPEI, Taiwan - A museum in Taiwan will host dissident artist Ai Weiwei’s first major exhibition in the overseas Chinese world from Saturday in a move that could upset Beijing.

Ai, famed for his work on the Bird’s Nest Olympic Stadium in Beijing and whose 81-day detention this year caused an international outcry, remains under close watch in China. He was released in late June after he was taken from Beijing airport and held in two secret locations.

Aptly titled “Absent” due to China’s ban on Ai traveling, the three-month exhibit at Taipei’s Fine Arts Museum will have 21 works on show, including a photograph of a person’s arm making an obscene gesture in Beijing’s Tiananmen Square.

“The title ‘Absent’ is, I think, an interesting reflection on this exhibition, on Taiwan, on his personal situation, his art and his contribution to the field,” said Chang Fang-wei, acting director of the museum’s exhibition department.China and Taiwan have been ruled separately since defeated Nationalist forces fled to the island at the end of a civil war with the Communists in 1949, and China has never renounced the use of force to reunify the two.

But while China has seen little political liberalization in the last few decades, Taiwan has become proudly democratic, thumbing its nose at many of the restrictions mainland Chinese take for granted, such as pervasive censorship.

Ai told Reuters he was happy to have a chance to exhibit in Taiwan, even if he could not be there.

“This is the first time I’m having an exhibition of my art works in the wider Chinese world. I’m really happy that it can be exhibited in Taiwan, because recently it has not [been] possible to have an exhibition in my own place of residence,” he said by phone.

“I have been notified that I won’t be allowed to go - that was the outcome of my application - so right now I cannot attend. But my family members will attend,” Ai added, without elaborating.

Ai’s detention ignited an outcry from many Western governments about China’s tightening grip on dissent that started in February, when dozens of rights activists and dissidents were detained and arrested.

“Perhaps for Chinese viewers Taiwan is the only place to see an Ai Weiwei exhibition,” said Qiao Yang, 40, a tourist from Shanghai who came to Taiwan specifically for the exhibition. “In China, we have heard of this person but could rarely see his works.”