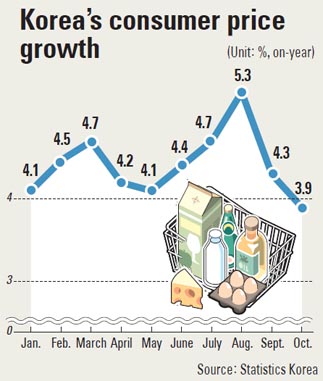 Fighting inflation, however, remains a key priority for the government as prices are expected to soar significantly before the end of the year.

The last time consumer prices in the country grew in the 3 percent range was in December. 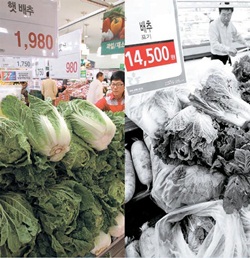 The deceleration in growth was helped by the falling price of fresh food, which plunged 14 percent last month from 2010. Of these, vegetables registered a huge drop of 33.6 percent.

It’s not that the lowered prices put the government, which has made fighting inflation a top priority, at ease.

In October, the on-year prices of daily goods such as rice (17.7 percent), red chili powder (101 percent), and salt (55.8 percent) have all soared ahead of the winter season.

The price of gold also increased 29.1 percent last month, while gasoline and diesel prices jumped 16.3 percent and 17.8 percent, respectively, as the won weakened against the U.S. dollar.

Industry analysts suggested that a fall was to be expected as prices grew last year by a record high of 4.1 percent due to the Napa cabbage crisis. This, they say, marks something of a temporary correction.

“November’s figure is expected to be higher than what we saw in October,” Yang Dong-hee, head of Statistics Korea’s price statistics department, said yesterday. “Import prices are expected to soar in November, and there will be hikes in [transportation-related] fares in some areas.”

According to Statistics Korea, expressway toll fees are expected to jump by an average of 2.9 percent from the end of this month, while those for the high-speed KTX railway will increase by 3.3 percent. Bus fares will also be raised by 11.1 percent in November in Incheon and parts of Gyeonggi.

Furthermore, dairy companies have increased the price of consumer milk by 9.4 percent, a move that will inevitably take its toll on the consumer price index this month. This will be announced on Dec. 1.

In an environment of continuous inflationary pressure, analysts say it will be difficult for the government to reach its target of keeping inflation to 4 percent this year.

According to Statistics Korea, the country’s consumer price growth should remain below 2 percent for both November and December in order for the government to meet this. The average rate of growth until October was 4.4 percent.

The government will apply a new system of calculating the consumer price index this month to reflect changing consumption trends such as smartphone fees.