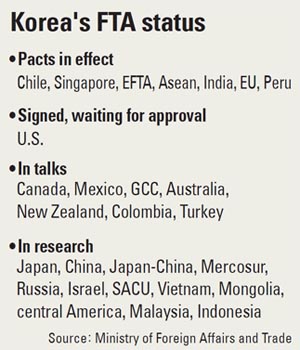 A foreign diplomat in Korea, who wished to remain anonymous, expressed his concern recently as discussions on his country’s free trade agreement with Korea have made no progress since May of last year.

The official showed his frustration at this stalemate as his term here as a commercial attache ends next year.

“The government is extremely busy and occupied at the moment with the Korea-United States FTA, so our discussions are pushed aside,” the official said. “Whenever we try to raise issues with our Korean counterparts, they always say they have no time.”

Apart from the trade deal with the United States, Korea is negotiating with seven other economic blocs - Canada, Mexico, the Gulf Cooperation Council, Australia, New Zealand, Colombia and Turkey - for a possible breakdown of barriers in trade. But as the opposition Democratic Party seems bent on obstructing the Korus FTA, which is already four years old and was finally approved by the U.S. Congress last month, it has scant chance of getting passed anytime soon. 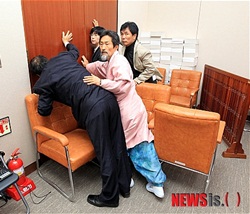 As Korea has given this issue top priority, it means nothing but headaches for other countries that have shown interest in tearing down their tax barriers for Korean firms.

“The Korus FTA is 100 percent affecting our deal,” said an official from a foreign business lobby group representing one of the countries negotiating with Korea on FTA terms. “There is nothing we can do at the moment but wait and hope that [it gets passed].”

The ruling and opposition parties have failed to find any common ground in passing the deal. Even though the ruling party has enough seats at the National Assembly to railroad it through parliament, it has been reluctant to risk alienating the public ahead of next year’s legislative and presidential elections.

The dispute comes after the U.S. Congress passed the bill last month while President Lee Myung-bak was visiting Washington for a summit with U.S. counterpart President Barack Obama.

While many foreign diplomatic officials here see these roadblocks as having also delayed their own talks on similar deals, the government said this is not the case.

“The reason why each agreement is being delayed is because they all have their own different sticking points,” said Ko Kyung-seok, director at the Ministry of Foreign Affairs and Trade’s FTA policy planning bureau.

He cited the example of the Korea-Australia FTA, which the two governments hope to sign within this year but which is being held up by differences over beef and automobiles. For the Korea-New Zealand FTA, problems have cropped up in the agricultural field.

“Australia and New Zealand each hold different views from Korea on the respective FTAs, which is why progress is not being made,” Ko said.

Cho Chang-sang, director at the Ministry of Strategy and Finance’s trade policy bureau, said that the countries Korea was negotiating with were “demanding too much.”

Korea already has trade deals in effect with seven economic blocs, according to the Finance Ministry. These are Chile, Singapore, the European Free Trade Association, the Association of Southeast Asian Nations (Asean), India, the European Union and Peru. Chile predates them all with a deal signed back in 2004.

Meanwhile, the government is researching ways of inking comparable agreements with others including Japan, China, the four Mercosur signatories (Argentina, Brazil, Paraguay and Uruguay), Russia and Vietnam. But a Finance Ministry official said recently that “next in line after the Korus FTA is China and Japan.”