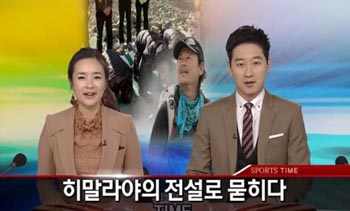 KBS newscaster Kim Bo-min made an apology yesterday on her Twitter account regarding what some considered an insensitive news cast.

On Monday’s segment of “Sports Time” on KBS 2TV nightly news, Kim, 33, reported that Korean mountaineer Park Young-seok and his crew went missing while climbing the Annapurna mountain range in the Himalayas in Nepal.

After the news cast aired, a flood of netizen comments appeared on the KBS homepage, saying that Kim’s “smiling” face was highly inappropriate upon delivering such news. Some viewers even commented that her smiley facial expression was “scary” and “unsettling” and demanded that she apologize to Park’s family and friends.

Yesterday, Kim wrote on her Twitter account a formal apology, saying she wasn’t smiling but that she apologizes for her regular facial expression being misconstrued by the public.

“I will work harder to become an announcer who does not get swept up in this kind of controversy ever again,” she wrote, adding that she apologizes to Park’s family as well and that she prays that he is still alive somewhere and that he will come back to his family.

Kim has been a newscaster for “Sports Time” since 2009.

In 2007, Kim drew national attention when she married popular football player Kim Nam-il. The couple has a son, Kim Suh-wu, who was born in 2008.