Credit conflict moves to other areas

Credit conflict moves to other areas 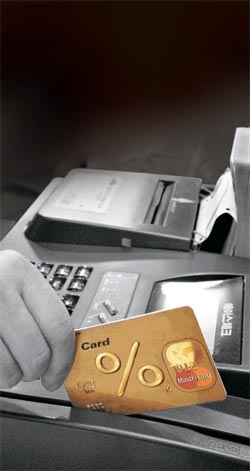 The credit card commission confrontation, despite recent efforts from the financial industry, is rapidly spilling over to many types of businesses.

Meanwhile, as the situation spins out of control, the government is moving off of the sidelines by investigating the commission rates.

However, as frustration flares up, there are growing speculations that private businesses’ mistrust of government policies is deepening.

Not only are small restaurateurs continuing to demand a reduction in commission rates, other industries, including hotels, private education institutions known as hagwons and even hospitals, are joining the campaign.

With less than a week since the financial advocates jointly announced measures to step up their social responsibilities, including the lowering of credit card commission rates and other service charges, an advocacy group with 5 million members, including business owners and their employees, is threatening to hold a massive rally by the end of the year if demands are not met.

“Although most of the businesses, including those in the entertainment industries [such as nightclubs and room salons] are small businesses, the credit card companies are levying high commission rates,” said Kim Bong-il, secretary general of the Federation of Professional Economic-Person Societies.

“We have reached a point where we can no longer tolerate this,” Kim added.

“We demand that the credit card commission rates are unilaterally lowered to 1.5 percent to all industries without discrimination.”

If the demands are not met, the members will hold a massive rally on Nov. 30, gathering at a stadium in Jamsil, southeastern Seoul, and their businesses will be closed for the day.

The rally will then move nationwide to Busan and Daejeon next month and in other cities, including Daegu, Gwangju and Jeju, in January.

If the credit card commission continues to refuse the proposal, the members are planning on another massive rally in Seoul in February.

The credit card commission confrontation was first sparked when the government, in a move to help small businesses, announced a bill that would allow such businesses to refuse payments under 10,000 won ($8.95) to be paid by credit card.

However, the small businesses, mostly restaurants, insisted that refusing credit card payments of small amounts would instead drive customers away.

They insisted that it would be better for them if credit card commissions were lowered to the rates that are offered for businesses such as golf courses and department stores of around 1.5 percent. To pressure the financial industry, a massive rally of roughly 100,000 restaurant owners was held at Jamsil stadium.

Among the credit card commission earnings, those from small businesses, including restaurants, in 2000 accounted for 11.2 percent, according to the Korea Finance Consumer Federation. This has grown to 27.9 percent in 2003 and 60.5 percent in 2007. Since then, the earnings of small businesses have hovered around 60 percent.

Meanwhile, Bank of Korea report released in April showed that Korea’s average credit card rating was 2.08 percent, which was higher than the 1.7 percent in Italy and 2 percent in the U.S.

On Thursday, in a move to resolve the situation, the five leading financial advocates, including the Korea Federation of Banks, laid out measures that included the lowering of the credit card commission to 1.8 percent as well as cutting back the service charges on ATM machines while expanding the banks and other financial companies’ contributions to welfare programs.

However, when the announcement was made that some of the measures, including the credit card commission rates, remained unchanged from previous reports, it failed to satisfy the discontented parties.

The financial companies are insisting that they have already made sacrifices, which may spark further confrontations.

The credit card companies are estimating net profit to shrink nearly 200 billion won once the lowered 1.8 percent rates are adopted.

Since the Oct. 18 massive rally of restaurateurs, followed by another rally by gas station owners, the government has been taking steps to ease the situation.

Financial authorities said they are responding to the discontent spreading within small business owners by reviewing credit card companies’ internal criteria for setting transaction fees, with a comprehensive measure to make necessary changes planned by the end of this year.

“We are currently analyzing the data submitted by each credit card company concerning the structure and criteria for assigning certain transaction fees to certain sectors,” said a financial regulator in charge of credit finance supervision. “If there’s any irrationalities, we will require [the card companies] to change them.”

The Financial Services Commission Chairman Kim Seok-dong and FSS Governor Kwon Hyuk-se have both been putting pressure on the credit card companies.

They said that the current commission rate systems were excessive and burdening the public. “We need to straighten out excessive profits [made from commission rates] that fail to properly explain the raw cost,” the FSS governor Kwon said.

According to an official at the Credit Finance Association, the government in the past five years has pressured credit card companies to lower the commission rates on several accounts.

“However, it seemed that as the private businesses owners feel the pinch it seemed that there is growing mistrust of government policies,” said an official at the Credit Finance Association.