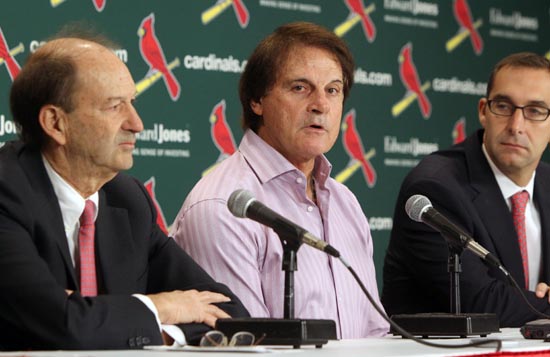 “I think this just feels like it’s time to end it,’’ the 67-year-old La Russa said at a news conference at Busch Stadium.

The World Series win over Texas was the third of La Russa’s 33-year career. The manager guided the Cardinals to the championship despite being 10 games behind Atlanta on Aug. 25 for the final playoff spot in the National League.

La Russa retires third on the all-time wins list, 35 behind second-place John McGraw. In addition to this season, he won championships in Oakland in 1989 and St. Louis in 2006.

“Other than some of the personal attachments, I feel good,’’ La Russa said. “I feel good that this is the right decision.’’

La Russa said there wasn’t a single factor that led to his decision, but he began having doubts about returning for 2012 midway through the season. In late August he told general manager John Mozeliak and other team officials.

La Russa said the timing of those discussions - about the time the Cardinals appeared to be out of wild card contention before their miraculous run - was pure coincidence. He said he simply felt it was time to go, a feeling that didn’t change even as the Cardinals squeaked into the playoffs on the final day of the season, then upset the Phillies, Brewers and Rangers.

He spoke with little emotion at the news conference with one exception, when he paused to compose himself as he thanked his wife, Elaine, and two daughters for putting up without him over much of the past 33 years. But he did say his meeting with players after Sunday’s parade and celebration was short but emotional.

“Some grown men cried,’’ La Russa said, then he joked, “I kind of liked that because they made me cry a few times.’’

Mozeliak said work is under way to find a new manager for the first time since La Russa was hired prior to the 1996 season. A search committee will be formed. Mozeliak did not speculate on how long the process might take.

La Russa answered flatly, “No,’’ when asked if he’ll ever manage again. He also said he had no plans to be a general manager, but said he is open to some sort of baseball job in the future.

La Russa was a .199 hitter in a brief major league career. He began as a manager with the Chicago White Sox in 1979. He guided the Oakland A’s to three straight American League pennants in 1988-1990 and the 1989 World Series title over the Giants.

La Russa was hired by the Cardinals in October 1995, soon after the new ownership group purchased the team from Anheuser-Busch. His impact was immediate - the Cardinals won the NL Central and came within a game of going to the World Series in 1996, losing to the Atlanta Braves.

Overall, St. Louis went to the playoffs nine times in La Russa’s 16 seasons, won pennants in 2004, 2006 and this year, and won two championships, over Detroit in 2006 and this season, rallying to win the final two games over Texas, including the memorable Game 6 when the Cardinals trailed five times and were down to their last strike in two innings. His teams were successful on the field and in the stands - the Cardinals drew three million fans in 13 of La Russa’s 16 seasons.

La Russa, who won 2,728 regular-season games, including 1,408 with the Cardinals, said he never considered coming back simply to reach No. 2 on the all-time wins list.