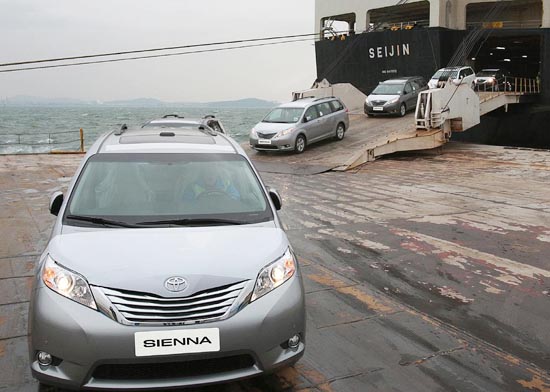 Toyota Motor Korea introduced its Sienna minivan, which is produced in the state of Indiana, to the country yesterday. This is the first time the local distributor of Toyota’s models has brought vehicles into Korea from outside Japan.

Toyota has become the second Japanese brand to import vehicles from the United States after Nissan, which shipped in its Altima midsize sedan.

The third-generation Sienna will be available for sale from next Tuesday, marking the first time the seven-seat minivan will be sold in a country other than the United States since it debuted in 1997.

“We will also bring the new-generation Camry produced in the U.S. to Korea soon,” Hisao Nakabayashi, president of Toyota’s Korean unit, told the press at Pyeongtaek Harbor in Gyeonggi, where the minivans were shipped to the country yesterday. “We are also considering importing compact cars and hatchbacks from Europe.”

Nakabayashi said Toyota was currently weighing the pros and cons of importing Toyotas from the United States.

“If the FTA takes effect, the tariff will be reduced by 4 percentage points [to 4 percent], but it takes over one month to ship cars in from Indiana or Kentucky [where Toyota has manufacturing facilities], while it only takes half a day to import cars from Japan,” he said. “So the transportation costs are very high.”

Japanese brands in Korea have been suffering from the high yen, which has eaten into their profits by raising the price of auto imports from Japan. At the same time, there is a limit to how much they can raise the selling prices of their vehicles. Additionally, Japanese brands have been losing their market share as buyers have been turning to European brands instead of aging Japanese models. A Toyota employee said the Sienna is expected to be priced at between 45 million won ($40,320) and 55 million won. Toyota is not the only Japanese brand mulling diversifying the source of its imports. Honda is also considering sourcing from Europe to take advantage of the Korea-EU FTA. It is reviewing the possibility of importing Civic compact sedans from the U.S. next year, although these will initially come from Japan when the model is launched in Korea next week.

Nissan may also import its Infiniti JX crossover from the U.S. Most Infiniti models are produced in Japan, but the JX is also being manufactured in the U.S.