Sony-Korea a power couple to be reckoned with

Sony-Korea a power couple to be reckoned with 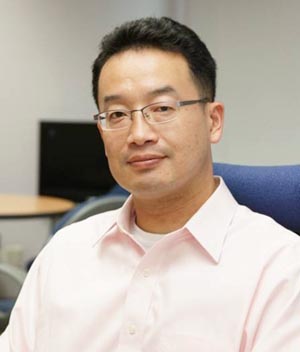 Hit by a huge earthquake in March, a recession in advanced countries and now the rising yen, Japan-based electronics firms like Sony have taken a relentless battering this year.

For the fiscal first quarter that ended on June 30, the Tokyo-headquartered company that gave the world the Walkman and PlayStation reported a net loss of 15.5 billion yen ($199 million).

Driven down by natural disaster and also a dip in demand for its TV sets, this marks a significant drop from its 25.7 billion yen net profit one year earlier. Revenue also dropped 10 percent to 1.49 trillion yen.

This prompted the company to downwardly revise its forecasts and anticipate a net income of 60 billion yen for the fiscal year ending March 31, 25 percent lower than it originally expected. The company is slated to announce its fiscal second quarter earnings today, and analysts expect another loss.

The Korea JoongAng Daily recently sat down with Kikuo Okura, the president of Sony Korea’s consumer product division, to discuss the latest developments in his department.

He said Sony Korea’s operations have not been hit by either the earthquake or recession, adding that the company is a good match for Korea given its early-adopter status and Sony’s interest in futuristic products.

Marriage made in heaven 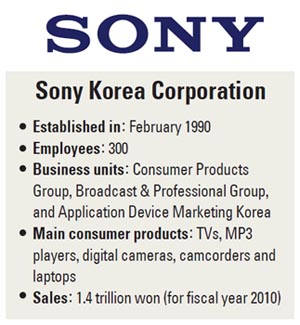 Okura is no stranger to either Sony or Korean culture, having earned his bachelor’s degree in Korean at Osaka University of Foreign Studies and joined Sony in 1992. Since then he has all-but pledged his future to the company, serving at branches in Hong Kong, mainland China and South America.

Okura says that Sony has always had its eye on the future as attested by the 3-D binoculars and head-mounted display it showcased at the IFA consumer electronics trade show in Berlin in early September. The equipment, which looks like a hi-tech visor befitting a character from Star Trek, claims to give users a cinematic experience by simulating the effect of watching a 750-inch screen from a distance of 20 meters (65 feet).

“These are clear indications that Sony is preparing for the future. They are in brand new product segments that no one has ventured into yet,” the 44-year-old said. “At Sony, engineers come up with new, innovative ideas and translate them into products. It’s not that they are ordered by the management about what products to work on.”

While such gadgets may serve well as attention grabbers, they seem more devised to showcase what Sony is capable of and less suited to popular demand.

Okura said he heard the same complaint upon the release of HDTV.

“Of course, you have to wait and see if people will use them. But you don’t know that in the initial stage. When Sony first introduced HD to the market, people asked who would use them, and whether they were necessary. But Sony looks at the future, and at what is possible.”

Citing other gambles that paid off for the company, he mentioned Sony’s mirrorless lens camera and the PlayStation.

Okura says Korea is a good fit for the company as no other market around the world is so sensitive to new trends, or so quick to absorb the latest gizmos.

“When we bring in the product, the distribution is so fast here,” he says. “Korea is open to new products and technologies, as attested by the recent rush for smartphones and fourth-generation mobile technology.”

Okura said not all news this year was bad news for Sony Korea, which introduced low-cost models with enhanced LED (light emitting diode) technology to its lineup of premium TVs.

“Before, Sony TVs were too expensive compared to ones made in Korea, so we couldn’t cover all consumer bases,” he said. “But now we’ve got price competitiveness and we can reach more consumers.”

The Sony president added that the Alpha DSLR camera business has been a nice little cash cow in the country.

TVs, cameras and laptops have been the three pillars of Sony Korea’s consumer product division. The company divides its operations into three segments: consumer products, broadcasting and application device marketing, which deals with memory sticks, batteries and other businesses.

Some have won over local consumers and others have fallen flat.

Sony’s latest device, a camcorder that doubles as a projector, has not garnered much attention here despite its novelty and ingenuity or the hype it generated prior to its release, Okura said.

While Sony has seen its fortunes wane from the heady days when every teenager wanted a Walkman and it reigned as the world’s No. 1 TV maker, Okura said the company retains its unique edge courtesy of its treasure trove of hardware and software.

“We have all the content, such as movies and music, so we are able to do things that other companies cannot,” he said, using the new Sony tablet as a case in point. The device, which has yet to be introduced in Korea, allows users to enjoy all of Sony’s games, movies and music.

Other examples of where Sony still has its finger firmly on the pulse include the Cybershot and Walkman phones released by handset maker Sony Ericsson, which fully exploit the resources of the Sony Group as a whole, he said.