Park points to need for cooperation

Park points to need for cooperation 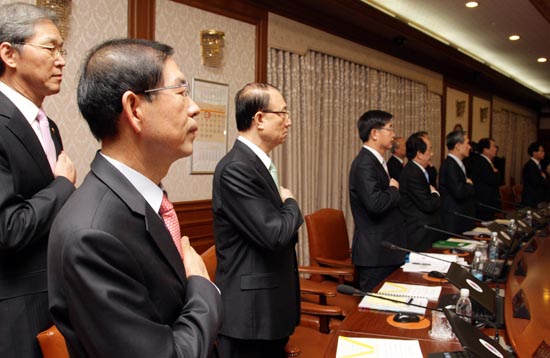 Since taking office on Oct. 27, the new mayor attended his meeting as an observer for the first time yesterday.

“During my election campaign, I felt people’s sincere desire for change and communication,” Park said. “I hope their voices and wishes could be reflected in government affairs.”

“I myself will also make my efforts to reflect their hopes in the policies,” Park continued. “Especially, when it comes to my administration, I still feel my lack of experience, so I will visit cabinet members frequently for help.”

The Seoul mayor is the only mayor in Korea who can attend cabinet meetings because of the importance of the position.

However, when President Lee Myung-bak was Seoul mayor during Roh Moo-hyun’s administration, he could not attend the meetings due to a presidential decree that prohibited the attendance of a Seoul mayor who belonged to a different political party than the president. The decree made by Roh was changed by Lee when the latter became president.

At yesterday’s meeting, all eyes were on a possible first dialogue between Lee and the new mayor. But the president could not attend because of a trip abroad. Prime Minister Kim Hwang-sik led the meeting.

A vice minister-level post, the vice mayor is one of the mayor’s closest aides. The vice mayor coordinates the city government’s relations with the National Assembly and the Seoul Metropolitan Council as well as with media and political parties.

Gi Dong-min, former vice spokesman for the Democratic Party, was chosen as the senior secretary for political affairs of the city government. Gi used to be a secretary for late President Kim Dae-jung and an aide to Kim Keun-tae, former minister of health and welfare.

Park’s spokesman has not yet been chosen. But city government observers say that Park will likely appoint an official from within the government, not bring in an outsider.

All of the tentative candidates to be Park’s aides will be vetted and appointed soon.