In a sign of times, women in 50s are the breadwinners

In a sign of times, women in 50s are the breadwinners 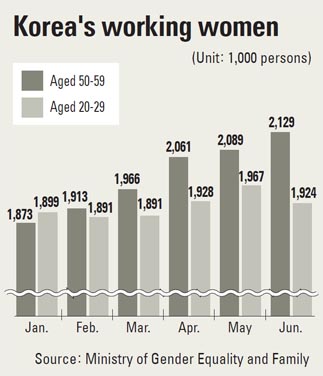 At 7 a.m. on weekdays, Park Soon-deok, 53, leaves her home in Cheongju, North Chungcheong, for work, as her 57-year-old husband enjoys the newspaper in the living room.

Until last year, Park spent her mornings preparing breakfast for her husband and 22-year-old son before sending them off to work and school. Things changed when her husband lost his job. He tried part-time jobs, but they weren’t enough. The only option for the family was for Park to become the breadwinner.

Early this year, Park was hired as a career consultant at the New Work Center for Women in Cheongju, which is operated by the Ministry of Gender Equality and Family. After 27 years as a homemaker, Park went back to the workplace.

These working women in their 50s are the wives of baby boomer men who are being pushed out of jobs and into retirement, or mothers of members of the young generation who can’t find work. (Last year, the unemployment rate of people aged between 15 and 29 reached 6.3 percent.) Most of them work because their families need them to. Their dream is of a monthly paycheck of 1.5 million won ($1,340).

“My family’s income was reduced when my husband took early retirement,” said another career consultant, also surnamed Park in Cheongju. “My 27-year-old daughter has a job in Seoul, but she has to support herself there. It costs a lot to support my son, who is in college. I didn’t know what my husband and I would do.” But then she got a job, and now, she says, she is “happy to be back at work.”

In Park’s case, returning to the workplace has been the “beginning of a new life” and an opportunity for “self-realization.” But for many women in their 50s, who spent half of their lives taking care of their family and don’t have lots of work experience, it’s the start of a tougher life. Many are forced to be janitors or kitchen staff. They barely earn 1 million won a month working part-time, and don’t receive benefits like insurance.

Min Hee-sook, 51, works in a nursing home in the morning and changes filters in water purifiers in people’s homes in the afternoon. Her day begins with a 50-minute subway ride from her home to Jeongneung to take care of a 75-year-old woman who suffers from Parkinson’s disease. Min washes her and cleans her home for about four hours and gets paid 28,000 won. She has a quick lunch and then does her rounds for the water purifier company. Min makes about 1.2 million won a month and most of it goes to paying for living expenses.

“My husband, 55, stays at home after his retirement, and my two daughters, 26 and 24, have jobs but are both temporary workers with small incomes,” said Min. Min’s daily routine ends at around 9 p.m. when she prepares dinner for her family.

Lee Hyo-ran, 54, who works at a supermarket in Sindorim-dong, Seoul, finds her work arduous and insecure.

“Most of the time, I’m so busy I don’t even have time to go to the toilet and my legs get swollen after standing up all day,” said Lee. “But I have to force a smile every time the manager walks by because it’s a temporary position and I can lose my job at any time.”

According to the Ministry of Employment and Labor, the average monthly income of working women in their 50s is 1.2 million won.

Lee Soon-ae, 53, who works as a cleaner at a Seoul electronics store, said, “The store pays me about 1.2 million won a month, but when the employment agency takes its commission, I only take home 1 million won.”

According to Lee Chan-young, a senior researcher at Samsung Economic Research Institute, “The government should provide more job opportunities in the field of education or services for women in their 50s.”