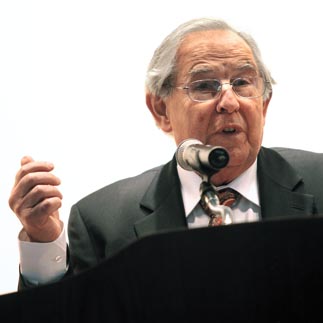 Fred R. Dallmayr, professor of political science and philosophy at the University of Notre Dame and author of over a dozen books, lauded the goals of Occupy Wall Street during an international conference on Monday.

“The poorer are getting poorer and the richer are getting richer, though the people in Wall Street don’t see it as a problem,” the 83-year-old professor said, addressing economic polarization in the United States.

If there is a solution, Dallmayr said it may be “through school education, through efforts such as Occupy Wall Street, which makes people conscience of the problem.”

Raising people’s conscience and “sense of citizenship” in society were the focus of Dallmayr’s speech at Kyung Hee University’s international conference, part of the 2011 Peace BAR Festival, a five-day event in honor of the 30th anniversary of the UN International Day of Peace.

The conference, which ended yesterday, invited renowned scholars from around the world to discuss the theme of “The Body and Catastrophe: Towards a New Utopia.”

“We are just realizing the harmful consequences of the U.S. market having been unregulated for 30 years,” Dallmayr said. Left alone, the capitalistic market will only seek profits, creating “a need for politics to regulate the market” and “a need for citizens to participate in politics.”

Speaking on the revolutions in Egypt and Tunisia, Dallmayr said he found the nonviolent methods of removing their leaders to be exemplary. However, he was critical of former Libyan leader Qaddafi’s violent death.

Scholars over the two days discussed a range of issues including the sustainability of civilization and human community in light of natural disasters, exhaustion of resources and polarized economic conditions.

The professor, who was born in Germany and is an American citizen, was the keynote speaker and discussed “The Body Politic: Fortunes and Misfortunes of a Concept.”

Dallmayr, who spent a year in India, said his time in Asia was “not to bring Western teaching but to learn; that is integral relatedness. We are mutually responsible to each other in this world.”

Dallmayr holds a Doctor of Law degree from the University of Munich and a Ph.D. in political science from Duke University and has taught at Notre Dame since 1978.