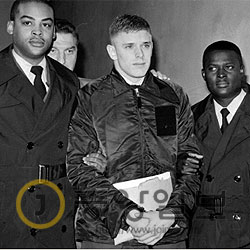 A U.S. soldier was sentenced to 10 years in prison for the violent rape of an 18-year-old Korean woman, the heaviest sentence for an American military personnel since the U.S.-ROK Status of Forces Agreement (SOFA) was revised in 2001.

The Uijeongbu District Court yesterday convicted the 21-year-old private, from the 2nd U.S. Infantry Division in Dongducheon, Gyeonggi, of rape and robbery.

“The victim had to shudder with fear and sexual humiliation at her own home while the accused satisfied his sexual desire through three hours of sadistic, perverted assault,” Judge Park In-sik wrote in his ruling. “The defendant deserves heavy punishment as he made no effort to compensate the victim or remedy the assault.”

The private was ordered to complete 80 hours in a sex-offender treatment program and have his name be released to the public.

The assault occurred around 4 a.m. on Sept. 24, when the private snuck into the high school student’s studio apartment and threatened her with a pair of scissors before raping her several times over the course of three hours. The woman had been watching television at the time. The U.S. soldier also stole 5,000 won ($4.48) from her.

Prosecutors had requested a 15-year prison sentence at a court hearing on Oct. 21. At the time, the private admitted to all accusations and said he “had nothing to say even if the court convicted him of the death penalty.”

The lawyer for the U.S. soldier claimed that the private was too drunk and was unable to make a right judgment. But prosecutors said the soldier was awake enough to take a steep flight of stairs when he exited the studio after the assault.

The case has generated strong backlash from the public and renewed calls for overhauling the SOFA, which prohibits police from detaining U.S. soldiers for questioning before they are indicted of a crime by prosecutors.

Civic activists said they would keep an eye on the case for fear that an appellate court could reduce the sentence and repatriate him to the United States.