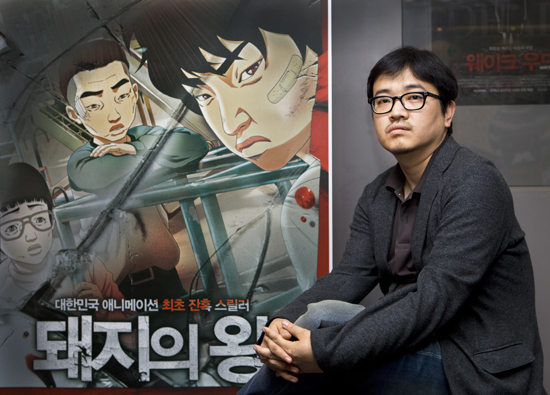 You may love it or hate it. Regardless, animation director Yuen Sang-ho’s debut feature film “The King of Pigs” is different from anything you’ve been watching.

The main theme of the film is bullying and the life-long trauma it causes. Evil triumphs over good. Characters try to learn how to be vicious by stabbing a cat and some even commit suicide. There is no happy ending.

The film is, of course, restricted to 18 and over. For those who are accustomed to doe-eyed, naive and beautiful lead characters from Pixar or Disney, these characters might even seem grotesque.

In a word, “The King of Pigs” is not a common animation. But the 96-minute film is receiving plenty of attention from critics, audiences and the media even before it comes out. 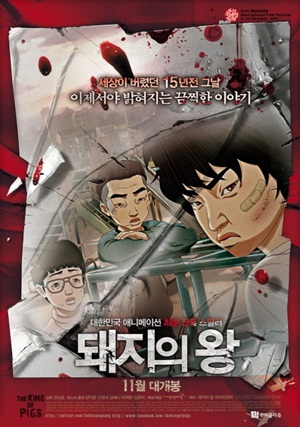 First released during the 16th Busan International Film Festival last month, the animation feature, which labels itself as a brutal thriller, sold all of its tickets in only 44 seconds.

In a country where an ordinary animation feature is made with a budget of between 2 billion ($1.7 million) and 3 billion won, on average, “The King of Pigs” was made with a 150-million-won budget, yet still achieved a triple crown at the BIFF.

“I tried to condense a society into this film and show how people are divided by classes even in a junior high school,” said the 33-year old director Yuen during a recent interview with the Korea JoongAng Daily.

One group has it all: they are rich and smart, thus trusted by their teachers. They rule the entire school and their daily routine is harassing other students.

The other group has nothing: they have no power, money or class. What they need is fake smiles and absolute obedience to their schoolmates who have all the power.

The film begins when Kyung-min, who used to be bullied by his classmates, contacts his long-lost friend Jong-seok. The two used to be close friends back in middle school but they lost contact after an incident that had happened 15 years ago. All grown up, Kyung-min wants to uncover the truth from their past but Jong-seok doesn’t.

Films with themes of bullying are nothing new, but what differentiates “The King of Pigs” from other films of this kind is that the film is very realistic with a strong message about class divide within society.

Here are excerpts from an interview with Yeun, who also wrote the fast-paced, well-woven screenplay. The film was released yesterday.

Q. Did you expect to receive three awards from BIFF along with rave reviews from the audience and the media alike?

A. No, not at all. I was very nervous about sharing the film with the audience. When I heard the film sold all of its seats, it made me even more nervous. But when I watched the film during BIFF with the audience, I realized the final product turned out as well as I intended.

There were no animations like yours in Korea. What inspired you to work on this unconventional work compared to the styles of companies like Disney and Pixar?

There are many feature animations like mine in European countries, especially in France. I was inspired by Japanese comics such as “Himizu” by Minoru Furuya and “Ongoing Ushijima the Loan Shark” by Manabe Shohei. (Both comics closely describe humans’ inner sides with rough sketches. -Ed.)

I’m a huge fan of Pixar and Disney, though (laughing).

There are strong and realistic lines in the film. After watching the film, I had the impression that part of the film is based on your own experience.

The animation is set in Gangnam (wealthy area of southern Seoul) back in the 90s. I went to middle school in Gangnam and you wouldn’t imagine the wide gap between the haves and have-nots. I felt insecure about lagging behind people who have. I’ll tell you one episode. I went to a restaurant to eat donkkaseu (deep-fried pork cutlet) for the first time in my life with my friends when I was a sophomore back in high school. For me, it was one of the most frightening moments because I didn’t know how to use a knife and fork.

As an artist and creator, what stories attract you the most?

I always observe people around me and watch how things are going whether they are social or political issues. While observing things around me, I come to have a different logic than others. Then I develop my logic into an animation in easy language so that more people can understand mine. That’s how I create.

Many animation studios often subcontract smaller companies to draw. And you had a stint at one of such companies. What was it like?

I was just happy that I could draw for a living, which I love the most. I didn’t even want to become a director or creator back then. But I quit because they treated us like machines.

We didn’t even know where the drawings went and how they were used. We didn’t know the whole story. We were just ordered to draw certain scenes. Around the time, I thought I needed to do something for the industry.