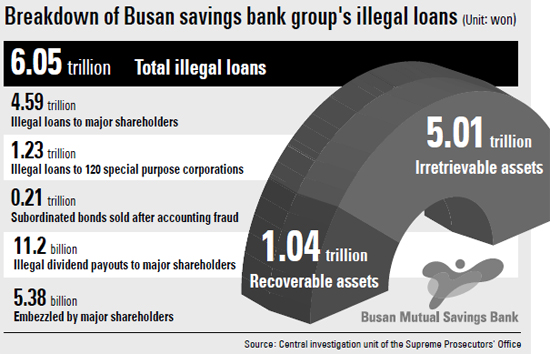 With 6 trillion won ($5.3 billion) worth of illegal loans by Busan Savings Bank and its affiliates coming from customers’ deposits and investments, the cost of filling the losses is also likely to end up coming from the Korean public.

The eight-month-long prosecutor-led investigation into the bank’s fraudulent practices unveiled 6.05 trillion won in illegal loans on Wednesday, but only 1.04 trillion won has been tracked down by prosecutors for future retrieval by the Korea Deposit Insurance Corp. (KDIC).

That leaves an irretrievable 5 trillion won in illegal loans likely to be written off as losses. It also leaves few options on the table for compensating the victims besides resorting to a special bailout fund set up within the KDIC for rescuing savings banks, the regulators said.

The next move will be to normalize the bank’s operations, and those of its affiliates, so it can either be sold to a third party or entrusted to the KDIC’s management.

The bailout fund consists of deposit insurance reserves from savings banks, and 45 percent of similar reserves from commercial banks and the securities and insurance sectors. The fund was created using money entrusted to various financial institutions by the public.

On top of this, the government budget could be used to rescue suspended savings banks, dealing another blow to taxpayers.

In August, the Financial Services Commission asked the Ministry of Strategy and Finance to inject 500 billion won from the national budget into the bailout fund, a proposal that is now being deliberated by a parliamentary committee.

“Only 30 to 40 percent of the 15 trillion to 17 trillion won that is needed to bail out the suspended savings banks is expected to be retrieved from savings banks’ assets,” said one financial regulatory official.

“The public could end up bearing a burden to the tune of 10 trillion won [to help normalize savings banks] in one way or another.”

As recovering the 1.04 trillion won in retrievable assets is going to be anything but a walk in the park, few expect the whole amount will be collected. Even if it were, it is widely thought an inadequate sum to fully reimburse the 27,196 customers who had more than the state-insured 50 million won deposited at Busan Savings Bank or its four affiliates.

One of the problems is that 85 percent of the retrievable assets by value are real-estate properties. As their value was calculated according to the price at the time of purchase, they could end up fetching a lower price when sold due to Korea’s stagnating property market.

Moreover, the KDIC has to file lawsuits to retrieve the assets as it is the courts’ responsibility to determine which debt it has the right to retrieve.

Experts say that up to several hundred lawsuits may be required, because individual suits must be filed for assets scattered under different names and companies, which would further slow down the recollection process.

Such limited compensation is expected to be too small to cover investors in the Busan-based group’s subordinated bonds, which assume lower priority than other debts in the event of an issuer going bankrupt.

The Financial Supervisory Service has recently ordered those savings banks that are still operating to conduct a self-review in a bid to find out whether they have made any inadequate disclosures of subordinated bonds’ risks during sales.

It also reportedly asked them to buy back any subordinated bonds that were sold without an adequate explanation provided of the risks involved.