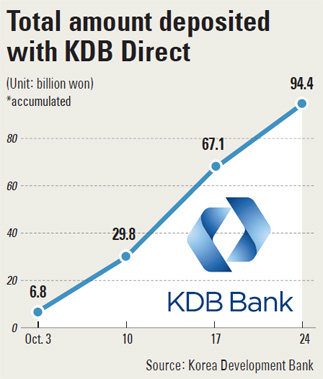 Bank teller Kim Hyun-jung races around the region each week to keep pace with Korea Development Bank’s burgeoning and prospective direct banking customer base, but she admits that others in the same line of work are even more harried.

“I don’t have to come out and meet customers as often as some bank employees in central Seoul do,” she said, using a laptop to enter a customer’s personal information into the system while sitting at a subway station in Gangseo District, western Seoul late last month.

“I heard customers are signing up so rapidly [for direct banking services] that staff have to travel outside their branches four or five times a week just to keep up.”

Kim, who was recruited by KDB’s Bucheon, Gyeonggi branch in September, has been tasked with helping swell the ranks of its new service, KDB Direct. In the one month since its launch, 5,190 customers have already signed up as of Wednesday.

With customer interest converging on the product, KDB was forced to hire 30 new personnel and persuade tellers to also chip in.

Although until now a nonentity in the field of retail banking, the state-owned bank is seeing initial progress in direct banking as a way to bring in additional deposits outside the confines of the bank’s limited number of branches before the fast-approaching deadline for KDB’s privatization in 2014.

With little visible difference in the product, service and local brand recognition between KDB Direct and a previous attempt by HSBC Korea, it remains to be seen whether KDB will successfully clear the finish line.

As a business model, direct banking conducts all of its operations online or by phone, without a corresponding offline presence.

Theoretically, it promises higher returns and a healthy profit margin by eliminating cost-heavy features such as branches, bank tellers, equipment and even mailed account statements.

According to KDB officials, removing branches from the equation can give much-needed value back to the customer in a nation overrun with branches on almost every street corner.

“Korean banks have hundreds more branches more their big counterparts in Japan, but they are only worth a fraction of their assets,” said Suh Seong-ho, head of the KDB Direct team within the bank’s retail banking promotion department.

“Branches cost a lot to establish, and maintaining those first-floor locations is not cheap,” Suh added . “An over-abundance of branches naturally leads to higher banking costs and handling fees, a cause of much controversy.”

A comparison oft-cited by KDB officials is the Bank of Tokyo-Mitsubishi UFJ, Japan’s largest bank by market value. It earned 402.5 billion yen ($5.16 billion) in net operating profit from its domestic retail business alone during fiscal 2010. But as of March 2010, it had just 772 domestic branches.

As of June this year, three out of four major Korean banks had more domestic branches than the Japanese banking giant: Kookmin Bank had 1,146, Woori 918 and Shinhan 960.

With direct banking, KDB says it is turning its weakness of having a paltry 60 bank branches as of September into a potential strength in retail banking. KDB Direct currently offers a comparatively high interest rate of 3.5 percent per annum for a deposit-based regular checking account.

KDB Direct was the brainchild of KDB Chairman Kang Man-soo, who saw a dire need to bolster the bank’s retail deposits before government backing is taken away as the bank privatizes.

In a recent audit of KDB released in late October by Korea’s Board of Audit and Inspection, concerns were raised over KDB’s lack of preparation for privatization due to its poor profitability. It received a “D” rating for its financial strength bereft of government backing.

“In order to increase the value of KDB for a smooth [transition], its profitability, financial soundness and risk management must be put in order so it can become attractive on the market,” the Board of Audit and Inspection said in the report.

“[But] a financing structure dependent on industrial finance bonds and a lack of deposits have left KDB with a lower net interest margin than other commercial banks,” it said.

“Although KDB maintains an A1 credit rating due to government payment guarantees, excluding government support, the Bank Financial Strength Rating of KDB is even lower than a regional bank,” the auditors concluded.

“When government support is taken away due to privatization, a higher cost of financing due to a lower credit rating is expected to worsen operating conditions.”

In the past, direct banking failed to take root in Korea - sounding potential alarm bells for KDB.

Global banking giant HSBC, which served as a forerunner by introducing direct banking in the U.K. in 1989, brought HSBC Direct to Korea in 2007 through its local unit.

Although it created an initial buzz by offering an annual interest rate of 3.5 percent for checking accounts, it never caught on among Korea’s Internet-savvy public. Users bemoaned the lowering of the interest rate and its separation into several categories in 2009, saying this rinsed out much of the service’s value. However, the service is still operating in Korea.

There is no clear consensus on why this first attempt at direct banking fell flat, but industry experts said the public’s familiarity with ubiquitous offline branches might be one reason. The requirement for face-to-face checks due to the so-called “real-name” law in Korean banking regulations has also been a source of complaints.

“[Direct banking] is not as simple as advertised,” said a deposit product developer at a leading commercial bank. “Not only does an employee have to visit the customer .?.?. [but] the person then has to log on online again to open the account. It doesn’t seem like much of an improvement over a single visit to a nearby bank branch.”

“The interest rate means the product is not looking to profit, just to gather customers,” said Koo Kyung-hoe, a banking analyst at Hyundai Securities.

Either way, KDB is going for broke with its direct banking venture and officials say it has nothing to lose.

“We won’t encounter any problems because we have such small deposits to begin with,” said Lim Kyung-taek, vice president of KDB.