Coming back from injury, Djokovic wins in 3 sets

Coming back from injury, Djokovic wins in 3 sets 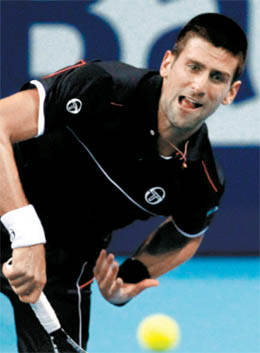 Novak Djokovic serves the ball to Xavier Malisse during their match at the Swiss Indoors ATP tennis tournament in Basel, Tuesday. [REUTERS/YONHAP]

BASEL, Switzerland - World No. 1 Novak Djokovic won a hard fought three-setter against veteran Xavier Malisse at the Swiss Indoors on Tuesday as he revealed he has recovered from what he termed the worst injury of his career.

Djokovic, playing for the first time in six weeks after a back injury in the Davis Cup semifinals left him lying in agony on the court in Serbia, finally overcame the in-form Belgian 6-2, 4-6, 7-5 to progress to the second round of the ATP tournament.

The world No. 1, who took the Basel title in 2009 but lost the final a year ago to Roger Federer, walked onto the court wearing a Joker Halloween mask, but got a fright of his own as he faced down Malisse, ranked 47th in the world.

The Serb ended with a break of the 30-year-old Belgian in the final game after losing his way as he served for victory leading 5-3 in the third set.

Djokovic dropped serve on a fifth break point, his seventh double-fault, but found a way to win three games later.

“I’m only just back from the biggest injury of my career,” said the winner of 10 titles in 2011. “I could do nothing for four-and-a-half weeks, I’ve only been hitting for just over a week. That’s not enough to play at my best. I’ve lost rhythm.

“I had too many errors and too many double-faults. But I’m happy just to be playing tennis again. I hope to build on this performance.”

The loser of just two ATP matches this season - plus one in the Davis Cup semifinal against Argentina - improved to 65-3 for the season.

Djokovic is the only man other than Federer to win the Basel title in the past five years.

Meanwhile, the chances for Mardy Fish to play in his first ATP season finale may have been badly compromised as the American suffered a hamstring injury just 11 minutes into his opening match.

Fish was leading compatriot James Blake 1-0 in the opening set when he was forced to retire.