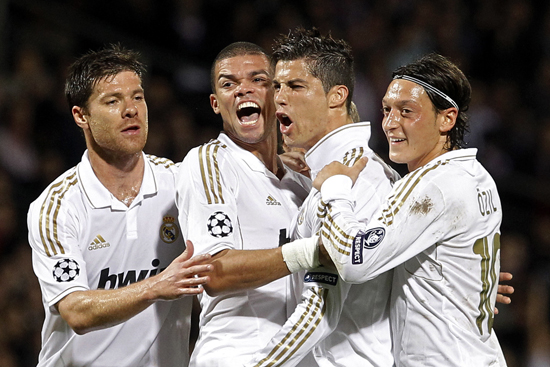 
LONDON - Cristiano Ronaldo scored his 100th goal for Real Madrid as the nine-time winners secured early passage into the Champions League knockout phase with a 2-0 victory at Lyon on Wednesday.

In his 105th match for Madrid, Ronaldo curled in a free kick in the 24th minute and then reached his century from the penalty spot in the 70th after being fouled by Mouhamadou Dabo.

“I didn’t expect to score my 100th goal so soon,’’ he said. “It was important to win and qualify for the next round. We made it. We’re calmer now that we’ve won our first four games.’’

The 26-year-old Portugal forward’s former club, Manchester United, went top of Group C with a 2-0 victory over Otelul Galati as Benfica dropped to second with a 1-1 draw with Basel.

United’s big-spending rival, Manchester City, won 3-0 at Villarreal to climb to second in Group A, which is topped by Bayern Munich after beating Napoli 3-2.

Inter Milan extended its Group B lead to four points with a 2-1 victory over Lille, as second-place CSKA Moscow was held to a 0-0 draw by Trabzonspor.

Real Madrid is the only team in the group stage that has won all of its matches and has yet to concede a goal. The team joins defending champion Barcelona and AC Milan in advancing with two games to spare.

In Lyon, Madrid stifled the hosts in midfield and Ronaldo managed to exploit a crack in the defensive wall from a free kick to place the ball out of the goalkeeper’s reach in the 24th.

The Spanish club came close to adding a second goal before halftime. Lassana Diarra played Mesut Ozil in but Hugo Lloris came off his line to knock the ball away in the 29th.

Lyon nearly equalized twice against the run of play. Winger Jimmy Briand chested down a high cross from Dabo to shoot straight at goalkeeper Iker Casillas in the 35th.

On the stroke of halftime, Lyon striker Bafetimbi Gomis won the ball in midfield to release Gourcuff down the right wing, but Casillas tipped Gourcuff’s powerful strike over the bar.

Ronaldo threatened a couple of times in the second half before firing the spot kick into the middle of the net to make it 2-0.

“We’re more mature than last year and we’re having a good run,’’ he said. “But we must also take things slowly.’’

Madrid tops Group D with 12 points, five clear of Ajax, which routed Dinamo Zagreb 4-0 to lead by three points ahead of Lyon.

Gregory van der Wiel sent Ajax’s opener into the roof of the net from a difficult angle in the 20th after a clever backheel from Christian Eriksen.

Miralem Sulejmani doubled the lead five minutes later after finishing off a move started by Siem de Jong, who made it 3-0 in the 64th and Nicolas Lodeiro rounded off the Dutch side’s victory in stoppage time.

Having dropped back into midfield for the match, Rooney found the net from 30 meters in the 87th minute with the shot heavily deflecting off Cristian Sarghi and wrongfooting goalkeeper Branko Grahovac.

Man United is level on eight points in Group C with Benfica, which was held to a 1-1 draw by Basel.

“We know in the Champions League there are no easy games, they came to defend and pressed quite high up, which was quite surprising,’’ Rooney said. “But it was 2-0 and we know if we win the next home game we’ll win the group.’’

In Munich, Mario Gomez scored a first-half hat trick for Bayern Munich to withstand Napoli’s fightback after a double from Federico Fernandez.

Both teams finished the match with 10 men. Napoli’s Juan Zuniga was sent off in the 70th and Bayern’s Holger Badstuber followed in the 77th, both after receiving a second booking.

Bayern remains three points ahead of Manchester City, which won away for the first time in the Champions League.

Yaya Toure scored a goal in each half for City at Villarreal, while Mario Balotelli marked his first appearance in Europe this season with a goal from the penalty spot before halftime after being fouled by Mateo Musacchio.

The only bump on the night City experienced came when Roberto Mancini hit his head on the underside of the dugout just before Toure’s opener. While the City manager initially refused treatment, he eventually was seen sitting in the dugout with an ice pack on his head.

Inter only needs a point from its last two matches to qualify from Group B as the Italian side has a four-point lead over CSKA Moscow.

Walter Samuel headed Inter ahead in first half and Diego Milito tapped in another in the 65th. Bottom-place Lille scored a late consolation when Tulio De Melo took advantage of a mix-up in the Inter defense. 