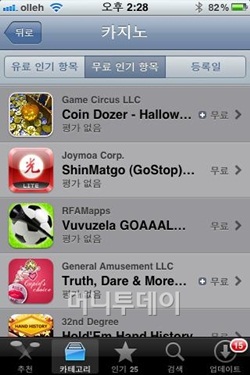 The new “game” category has now appeared in Apple’s app store, allowing local users of iPhones and iPads to download globally popular mobile games such as “Angry Birds,” which was available in Apple’s U.S. app store.

The move comes after the Korean government agreed to exempt mobile game applications from the government rating process in a bid to stimulate the local game market.

Apple closed that section a year and seven months ago, citing the country’s censorship laws.

With that, Koreans using the iPhone, iPad and iPod Touch had to take a detour - creating a separate account with a U.S. address - to be able to enjoy games offered by the app store.

Previously, Apple and Google Inc. disabled the game category in their application markets in Korea, instead of having their mobile games censored by the Game Rating Board.

Under the revised rules, mobile game developers and application market operators can classify game applications without having them rated by the Game Rating Board. They are, however, advised to discuss the criteria of classifications with the board, which is a government agency.

The launch of the mobile game market for Apple product users is expected to serve as a boon to local game developers who have been trying to develop products for Korea’s 20 million smartphone users.

Google, which has been in talks with the government regarding listing its game applications on its Android market, is expected to launch the game category in early November, Culture Minister Choe Kwang-sik told the National Assembly on Tuesday.

Some Korean game publishers were quick enough to release their games on the first day of Apple’s Korean app store’s debut.

Com2us, another mobile game developer, kicked off a limited-time offer selling 20 games at $0.99 until Sunday. Each game will be sold at between $2.99 and $4.99 after the promotion.

Other Korean game publishers praised the news, too.

“We’re planning to release some games that are already popular in the T Store into Apple’s Korean app store as soon as possible,” said Kim Hyo-eun, an official at KTH. ”Apple’s app store definitely will be another profit generating source for us.”

Another industry official who asked not to be named told Korea JoongAng Daily that Apple’s opening of the Korean app store could pose a threat to Korean app stores like T Store and Olleh Market.