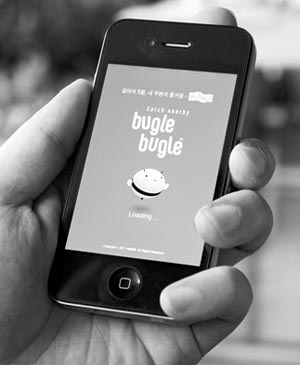 An iPhone user checks out Bugle Bugle to find discounts and store promotions in the vicinity. [JoongAng Ilbo]

With the number of smartphone users in the country exceeding 20 million last month, more subscribers are turning to location-based services (LBS) to pinpoint places of interest, leading local developers to devise a slew of LBS apps.

In their early days, the services allowed users to search for geographically convenient areas but neglected to provide maps and other details. They are now more detailed and more diverse, industry insiders said.

Bugle Bugle is gaining a following among bargain hunters in Seoul. Created by electronic payment service provider Inicis, it allows business owners to post mobile flyers and coupons to attract customers, who can scout out cheaper products, affordable real estate or even part-time jobs in specific districts of the city by keying in to the app.

In fact, the app is so wide-ranging it even extends to owners of missing pets, who can post flyers of their AWOL animal with descriptions and wait for responses from other smartphone users who may have sighted their pet.

Meanwhile, to facilitate payments and cut costs on shipping, users can buy and sell their used goods through Inicis’ electronic payment system. The company said the app allows people to set up a meeting point by exchanging messages so they can directly pick up goods from the seller, eschewing the middle man altogether.

Bugle Bugle is available at Apple’s app store and will soon be released in Android form, it added.

KTH, a Web portal affiliate of KT that also develops apps, including the popular Pudding Camera, recently released a location-based program called I’m in a Hot Spot. This enables users to review and rate restaurants, coffee shops and the like to give interested parties a reliable frame of reference, according to KTH. It said the app was downloaded 700,000 times between its launch in February and the end of October.

Another useful addition to Korea’s treasure trove - given its culture of long office hours and all-night drinking - is the Android-based Naerilttae Kkaewojwo (Wake Me up When I Need to Get Off at a Bus Stop). Using an in-built alarm, it forewarns passengers of their destination bus stops after they simply type in their points of embarkation and disembarkation.

Another Android app called Junggan-eseo Manna (Meet Me at a Middle Point), allows organizers of meetings to set up a nearby rendezvous point by typing in the current locations of everyone invited to attend.

The app also provides information on popular restaurants and other fun spots.