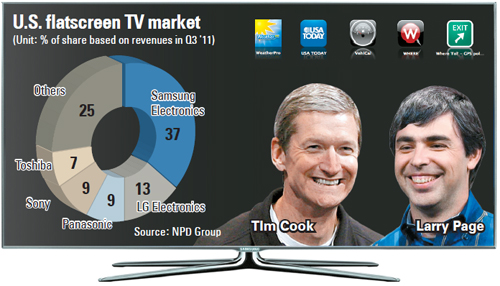 Your living room could prove the next battlefield for IT titans as the market for smart TVs heats up, with Google on Monday unveiling the latest version of its TV service, Google TV 2.0.

The No. 1 search engine in the United States also announced plans to create about 100 online channels of original video programming for its YouTube Web site.

The move shows Google has not abandoned its Web-connected, application-offering smart TV business, despite a tepid response from consumers to its first-generation Google TV, which was introduced in October of last year.

Speculation is also building that Apple has spent years trying to perfect its TV-set device, which some media have already dubbed the iTV.

Fueling the rumors was a quote in Walter Isaacson’s hot-selling new biography, called simply “Steve Jobs.” In it, the Apple co-founder was quoted as saying, “I’d like to create an integrated television set that is completely easy to use. .?.?. It would be seamlessly synched with all of your devices and with iCloud.”

Korea, home to the world’s top TV vendors, is closely following the developments in this field as concern mounts of potential disruptions to the conventional TV market akin to what happened with the iPhone vis-a-vis the mobile phone market.

Samsung Electronics and LG Electronics - the No. 1 and No. 2 flatscreen TV manufacturers - have responded with disdain to such comments, however, based on the argument that the experience they have built up over decades in the business holds them in good stead.

The battle for dominance in the smart TV market actually began last year, after the Google TV - a collaboration between Google, Sony and Logitech - was paraded around the huge IFA consumer electronics tradeshow in Berlin. LG Electronics subsequently unveiled its first smart TV.

It was around that time that Apple showcased its Apple TV, a set-top box that allows users to access digital content from the Internet on their television sets. Samsung threw its hat in the ring by staging a developer’s conference on apps for smart TVs.

But it was not until this year that consumers got a clearer idea of just what smart TVs represent.

Through aggressive partnerships, marketing campaigns and developer conferences, TV manufacturers have made plenty of recreational material available on the devices.

Samsung has joined hands with content providers such as YouTube, Comcast, Time Warner, Real Madrid and the Berliner Philharmoniker to offer around 1,000 applications in its app store designed specifically for smart TVs.

“The key to success in [this area] is securing a lot of good content,” said Yoon Boo-keun, the president of Samsung’s home entertainment unit. Samsung predicts that a total of 50 million smart TVs will be sold next year globally.

Similarly, LG formed open-app alliances with Philips and Sharp, meaning that the same app can be distributed on the TVs of all three companies. It has already seen its stockpile of apps hit 1,200, including one that plays backstage 3-D videos of K-pop stars.

“It is now a prerequisite that TVs have a ‘smart’ function,” said Havis Kwon, the president of LG’s home entertainment division. “We have worked harder than our rivals to boost content in this area.’”

The Financial Times reported recently that LG has signed a deal with California-based YuMe, a company that provides video advertising services and software, to add an advertising capability to its smart TVs. The paper names Toyota Motor Sales U.S.A. as the first sponsor to sign up, with the aim of promoting its 2012 Camry on this emerging media platform.

Confidence at a premium

Korean companies say it will not be easy to topple them from their hard-won perches, especially the Google TV and rumored iTV, as there are crucial differences between the TV and smartphone industries. But Google and Apple have emerged as the biggest names in the IT world with the recent boom of smartphones and tablets.

“It would be good for Apple and Google to enter the smart TV business, because that will expand the market,” Yoon said, shrugging off concerns during a recent meeting with reporters.

Lee Ssang-su, the vice president of LG Electronics’ LCD TV division, also played down the threat to domestic companies. “There are clear differences between the TVs made by IT firms and those made by TV manufacturers,” he said.

Market insiders said the environment and manner in which TVs are viewed creates a whole new ball game that will put newcomers trying to migrate over from the cellphone industry at a loss.

“The characteristics of the TV industry are completely different from those of the mobile business, where someone like Apple can come along and score a jackpot with its iPod, iPhone and iPad,” one insider said.

“TV sets are placed in a living room and usually watched by more than one person. So what it has to offer to users is quite different [from more portable new media].”

Sources also note that hardware is more important in TVs than in mobile devices.

Sony was able to dominate the TV market in the 1980s and 1990s with the bright hues it offered and Samsung is cleaning up now with its LCD, LED and 3-D display technologies.

Google is better positioned than before, however, after it recently acquired Motorola Mobility, which makes cable set-top boxes. But Apple has made its devices through contract manufacturers like Taiwan’s Foxconn, which puts Apple in a notably disadvantageous position in terms of hardware.

“The display will be worse [if made by contract manufacturers], and picture clarity is the key selling point for TVs,” said one source familiar with the industry.

Another source in the Korean technology industry said the leading players have formed impenetrable supply chains that will be tough to beat.

“Samsung and LG have been making TVs for more than 40 years now. That not only means better technology, but also well-established supply chains. This is crucial for the TV business.”

An industry report on Monday revealed that Samsung Electronics and LG Electronics combined for a 50 percent share of the U.S. TV market in quarter through September on the back of strong demand for their premium TVs with 3-D capabilities and Web connectivity.

This marks the first time that the world’s two leading TV manufacturers have gobbled up half of the U.S. market for an entire quarter, according to data released by NPD Group, a New York-based market research firm. The U.S. is the world’s No. 1 TV market, although China is fast closing the gap.

But critics point out that it would be unwise to underestimate Google and Apple.

“It’s very likely that the software capabilities and application market management experience make them both pretty competitive in the smart TV business,” Lee Ho-geun, a business administration professor at Yonsei University, wrote recently in a column.

“Sony was far and away No. 1 in the global TV market before, but that is no longer the case. In much the same way, Samsung’s stranglehold could well be threatened when the top players in the mobile platform market switch over.”

Kim Dong-won, an analyst with Hyundai Securities, said Korea’s tech titans are right to feel threatened as “we are witnessing a power shift from hardware companies to software companies in the IT business.”

“The deciding factor will be who can offer high-quality content,” he added.

Like its rivals, Samsung has hardly been dealing with an ideal environment for TV sales recently, as global economic woes cause consumers to further tighten their purse strings.

The company saw its display panel business swing to the red from a year ago, posting an operating loss of 90 billion won in the third quarter as a prolonged downturn in the TV market has taken its toll on prices of large panels.

As such, smart TV makers could have their work cut out for them next year as they fight over a shrinking pool of customers. “But next year we have the 2012 Olympic Games in London, and major sporting events like this can often spur interest in, and sales of, premium TVs,” said an employee at one Korean TV manufacturer.