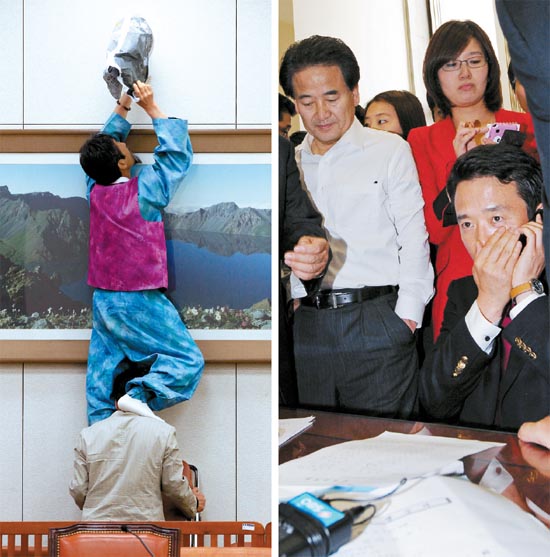 Left: Representative Kang Ki-kab of the Democratic Labor Party covers a CCTV camera inside the Foreign Affairs, Trade and Unification Committee room yesterday to block from view the activities of opposition lawmakers barricaded inside. Kang was convicted of using violence in the National Assembly in 2009. [NEWSIS]
Right: Representative Nam Kyung-pil of the Grand National Party, right, chairman of the Foreign Affairs, Trade and Unification Committee, calls Representative Hwang Woo-yea, floor leader of the GNP, as opposition lawmakers object to Nam’s decision to introduce the FTA in committee in another conference room yesterday. [NEWSIS]


In a surprise move, the Grand National Party introduced the Korea-U.S. free trade agreement in the Foreign Affairs, Trade and Unification Committee, bringing the pact closer to ratification over the intense objections of opposition lawmakers, though it was unable to vote the bill out of committee.

“I am now introducing the Korea-U.S. FTA ratification bill,” Nam said, immediately after the committee finished deliberating the budget for the Ministry of Foreign Affairs and Trade. “Discussion and voting will take place separately.”

The FTA was introduced only after Nam and the other committee members were forced to convene in a small conference room because opposition lawmakers had barricaded themselves in the committee room since Tuesday night.

One opposition lawmaker even blocked security cameras inside the room to conceal their activities inside.

But Nam’s move was quickly followed by disorder, with opposition lawmakers crying foul that the committee’s unscheduled consideration of the motion in another room amounted to a procedural error.

Alarmed by the situation, the DP ordered all its lawmakers to rush into the cramped room in a show of physical force. As deliberations on the FTA began, opposition lawmakers began speaking out of turn and yelling at GNP lawmakers, descending the entire proceedings into chaos.

Efforts by the floor leaders of the GNP and DP to end the chaos and come up with a last-minute compromise on the provision on investor-state dispute settlements were fruitless, and Nam at 6:20 p.m. adjourned the committee for the day without taking a vote, even though all 16 GNP committee members were present.

Nam’s decision to introduce the FTA in committee came as a surprise because the four-term lawmaker, who has long said he was against any more violence in the National Assembly, had promised to handle the controversial bill through negotiations.

His decision to give up on a peaceful resolution yesterday afternoon seemed to indicate that he had lost patience with the opposition’s obstruction, ensuring high likelihood of a physical brawl in the full session of the National Assembly scheduled for today.

The day’s mayhem began in the morning with a scheduled deliberation on the budget for the Ministry of Foreign Affairs and Trade. Opposition lawmakers locked GNP lawmakers out of the committee room, with scuffles breaking out between aides and National Assembly security personnel.

Aides to opposition lawmakers and opposition officials had formed a scrum in the hallway outside the committee room and clashed with a group of security guards who attempted to remove them.

“I had promised that we would review the ministry’s budget today and the FTA ratification bill would not be voted until the budget issue is done,” Nam said as he stood in the hallway unable to enter the committee room. “How can they lock us out from the budget deliberation?”

He also condemned the DP and DLP for “pushing the limit day by day” and “daring the GNP to step on them and send the FTA directly to the floor.” Nam also said the actions of opposition lawmakers left no choice but for the GNP to use its large parliamentary majority.

If the FTA passes committee, the bill will be sent to the full National Assembly for a vote.

The FTA, first concluded in 2007 and revised after renegotiations at the end of last year, was approved by the U.S. Congress and signed by U.S. President Barack Obama in October.

The Lee Myung-bak administration and the ruling GNP have said they wanted the National Assembly to approve the FTA before November so that it could take effect on Jan. 1, 2012, as scheduled. However, the self-imposed October deadline has come and gone over the sticky issue of investor-state dispute settlements.