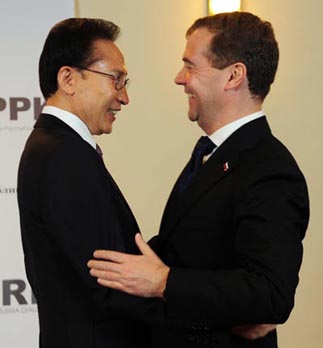 ST. PETERSBURG, Russia - President Lee Myung-bak and Russian President Dmitri Medvedev agreed yesterday to work closely together on a project to build a gas pipeline linking the two countries via North Korea, saying it would benefit all three countries involved.

The gas pipeline project was among key topics in summit talks between Lee and Medvedev held in Russia’s second-largest city of St. Petersburg, along with efforts to end North Korea’s nuclear programs and ways to bolster economic and other cooperation between Russia and South Korea.

“The two leaders shared an understanding that the project to bring Russian natural gas through a pipeline via North Korea, if pushed forward successfully, will bring economic benefits to all three countries and agreed to cooperate closely to realize this,” the South’s presidential office said in a statement.

Lee said, however, that he is concerned about the potential safety risks associated with the pipeline’s passage through the provocative North in the wake of the regime’s two deadly attacks on the South last year and called for Russia’s cooperation to resolve the nuclear standoff and other North Korea issues.

“The two leaders agreed that if this issue is addressed, they could also consider a project to provide surplus electricity from Russia’s Far East to South Korea via North Korea,” the presidential office said.

The massive project, which has been discussed for about 20 years, has never materialized due in part to security tensions. It gained momentum, however, after the North’s leader, Kim Jong-il, in summit talks with Medvedev in August, expressed his willingness to permit the envisioned pipeline to go through.

The project has drawn much media attention as it could help reduce tensions between the two Koreas.

On Tuesday, an official with Russia’s state-run gas firm Gazprom said the company and its South Korean counterpart, Korea Gas Corp., agreed in a memorandum of understanding signed in September to start construction of the pipeline in 2013 and ship Siberian gas through the connection from 2017.

South Korean officials downplayed the significance of that timeline, however, saying the project still has a long way to go. Officials said South Korea and Russia can launch meaningful negotiations only after Russia and North Korea agree on pipeline transit fees.

While discussing North Korea, Lee and Medvedev agreed to cooperate closely to lay the groundwork for resumption of six-party talks, aimed at ending Pyongyang’s nuclear ambitions, based on the common understanding that a comprehensive and fundamental resolution of the issue is key to peace and stability in the region, the statement said.