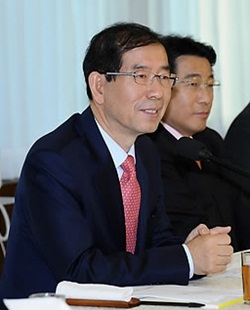 After providing free meals for all elementary school students in Seoul as his first order of business, newly elected Mayor Park Won-soon yesterday said that he would cut the tuition of a city-run university in half, stepping up his efforts to expand the city’s welfare programs.

In addition to scaling down his predecessor’s Han River Renaissance Project, Park is planning to follow through on his promises to increase public assistance ahead of the parliamentary budget meeting in December.

According to the Seoul Metropolitan Government yesterday, Park met with his 18 outside advisers on Wednesday to discuss former Mayor Oh Se-hoon’s large-scale construction projects including the Han River Renaissance project and Dongdaemun Design Plaza.

At the meeting, Park and his advisers asked city government officials to rearrange their priorities or reduce funding for some expensive projects while increasing the budget for Park’s election pledges such as providing free meals to more students or building 80,000 public housing units for underprivileged residents.

“For me, working out a budget is the biggest assignment,” Park told reporters at a luncheon yesterday.

Park told reporters that he decided to cut tuition for the University of Seoul, a city-run university.

The university, which receives as much as half of its funding from the city government, has recently asked Seoul for additional funding, about 18.2 billion won ($16 million), to reduce the cost of tuition by half.

“Although the money, 18.2 billion won, is not small, I think the worth of the funding exceeds the amount of the money,” Park said. “If I make this funding an example, it could spread to other local governments nationwide.”

On the proposal to build 80,000 public housing units, the mayor said, “I think the current construction standard, building apartments for four-person families, is old-fashioned. The central and local governments should carry out a new housing policy for people living alone or couples without children. So I will provide [small-sized] public apartments for those people.”

Asked how he would respond to possible criticisms that his welfare policies were “populist,” Park said that he thought Korea still needed more welfare programs.

“I think Korea still ranks at the bottom among OECD countries in terms of providing welfare services to people,” Park said.

“There is a gap between Korea’s official economic size and the quality of people’s lives. Welfare is not a free service or a waste, but investing in people for the future.”

City government observers say that Park only has discretionary spending power over 500 billion won, making it likely that he will try to reduce the plans made by former Mayor Oh to implement his welfare pledges.