Sohn: Liberal parties must merge for victory next year

Sohn: Liberal parties must merge for victory next year 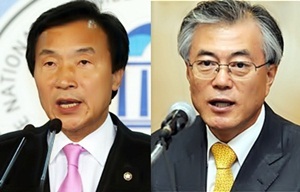 In an effort to unite the nation’s liberals and win next year’s elections, Representative Sohn Hak-kyu, chairman of the Democratic Party, proposed a plan yesterday to merge progressive opposition parties, civic groups and factions, though it was met with a cold response from key stakeholders.

“The Democratic Party leadership hereby declares that we will make it our destiny to push for a liberal merger,” Sohn said, calling for a consolidated party before the end of the year.

Sohn, who was formerly a Grand National before bolting the party, said Park Won-soon’s victory in last month’s Seoul mayoral by-election showed that liberals could win when united but lose if they were not, as was the case in the rest of the by-election races across the country.

“I dare to say that a merger is our hope, while a division means our defeat,” Sohn said. “I propose that all liberal and progressive political parties, political factions and labor groups that uphold liberal values, and all opinion leaders join the move to create this new political party.”

Saying that the Democrats were ready to merge, Sohn called for the formation of a committee to launch the new party after key liberal stakeholders sit down for discussions.

“I propose to establish the committee before the end of this month and complete the merger by the end of this year,” Sohn said. The DP, for its part, has launched an internal committee on the proposal, with all members of its Supreme Council participating, Sohn said.

Sohn’s plan also includes a liberals’ convention in December to elect leadership for the proposed party, according to a senior DP official. The DP had also scheduled its leadership election next month. Under DP rules, a presidential candidate is barred from holding the chairmanship within a year of the election. Sohn is considered to be a possible Blue House candidate.

Sohn’s roadmap was met with a cold response from liberal quarters, even among many Democrats, many of them criticizing their chairman’s proposal as too hasty and fearing that a consolidated party would reduce their influence.

Instead, some DP members said that Sohn should have resigned for the DP’s failure to field a candidate in the Seoul mayoral by-election and criticized his plan for a grand merger as an attempt to avoid responsibility. The DP’s nominee lost to the independent Park Won-soon in the liberal primary.

“Although the party members demanded the resignation of the Sohn leadership two days ago, it was flatly denied,” Representative Kim Boo-kyum, a three-term lawmaker, said in a statement. “The leadership made a de facto declaration that they would lead the DP until it is forced to shut down. I am enraged to see the leadership’s behavior.”

In addition to the Democratic Party, which is the largest opposition party, smaller parties such as the Democratic Labor Party, liberal civic groups as well as loyalists to the late former President Roh Moo-hyun would constitute the main components of a merger.

Roh loyalists already established in September a group called Innovation and Integration and proposed last month the creation of a new political party to represent a larger spectrum of liberals.

The group is led by six co-chairmen including Lee Hae-chan, former prime minister under the Roh administration, and Moon Jae-in, head of the Roh Moo-hyun Foundation and former chief of staff to Roh.
Sources in the DP said that Innovation and Integration members agreed in general with the DP’s proposal.

“It is positive to see the DP demonstrate its commitment for the liberal merger,” Kim Ki-sik, a co-chairman of Innovation and Integration, told Yonhap News Agency. “We welcome the move.”

The New Progressive Party also responded unenthusiastically to Sohn’s proposal. “Taking into account the backgrounds, histories and party platforms, we are negative about a grand merger of all political parties,” said Kim Jong-cheol, spokesman of the New Progressive Party. “There are also great differences in the culture of each party.”

Kim said it would be more desirable for each political party to maintain its own identity and respect each other while strengthening their coalition.

The People’s Participation Party, led by Rhyu Si-min, a key Roh loyalist, said it would seriously consider the DP’s proposal, but its priority would still be a merger of smaller progressive parties.