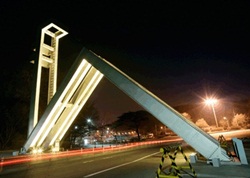 The government’s interim report on 113 universities across the country found poor financial management, embezzlement and bribery in some 50 schools, the Board of Audit and Inspection (BAI) said yesterday.

The report comes from a large-scale inspection by 399 officials since July to help the government come up with measures to lower university tuition.

An executive director at one school, identified as “A,” is accused of embezzling 16 billion won ($14. million) and using 4 billion won to purchase real estate for family. At another university, identified as “I,” professors allegedly embezzled government subsidies for the school and raised a slush fund of about 1 billion won for personal use.

The president of a university identified as “M,” meanwhile, is accused of receiving 90 million won in reimbursements for 72 hours of medical treatment, the maximum covered by the university, even though has not received medical treatment since taking the position in 2007.

The BAI said it would request a police investigation on about 90 board members, professors and faculty members of the universities who committed serious crimes such as embezzlement as well as those who have high potential to destroy evidence.

After inspecting the management operations of 22 universities that had trouble filling up their student or faculty quota, the BAI found that most of them had unfairly admitted new students and had inappropriately given out course credits to their students.

A total of 11 universities among the 22, including the university identified as “A,” admitted some 800 freshmen who were family members of the faculty even though the students did not meet the admission criteria. About 10 universities were found to have inappropriately given out course credits to a total of 1,700 students with low attendance by manipulating their records. Five universities also employed about 50 professors without any teaching experience or research achievements to avoid sanctions for having a substandard number of professors.

Both public and private universities, however, were critical of the BAI’s “untimely and inappropriate inspection.” While schools said that they understood the seriousness of corruption at some universities, many insisted that the inspection had been excessive and had infringed upon the schools’ independence.

Yonsei University filed a constitutional appeal on Tuesday claiming that “[the BAI] infringed the management autonomy of private universities that is guaranteed by constitutional law as well as academic freedom.”

The university also insisted, “The BAI’s inspection should be limited to management of national research funds or in sectors that are supported by the government,” adding that “a comprehensive inspection on all business affairs of a private university is an abuse of government authority.”

Hwang Dae-joon, secretary general of the Korea Council for University Education, said, “Universities should correct what has been pointed out by the Board of Audit and Inspection, but the universities have a lot to say about how inappropriately the BAI carried out its inspection.”

He added, “It’s not right to make people generalize that such malpractices are happening in most universities.”

A director of a planning department of a four-year university in Seoul who requested anonymity told the JoongAng Ilbo yesterday, “The OECD average of government funding for a university is 70 percent but we only receive 20 percent,” criticizing that “the government made universities the political scapegoat after being cornered by the college tuition issue.”