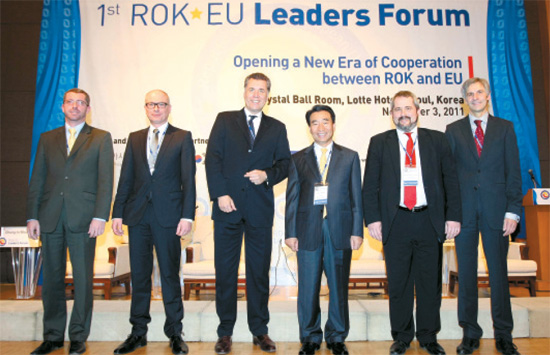 With the ratification of the Korea-U.S. free trade agreement still in limbo at the National Assembly, political and academic leaders of Korea and the European Union gathered in Seoul yesterday to launch a forum to discuss taking bilateral cooperation to the next level.

Titled “Opening a New Era of Cooperation between ROK and EU,” the one-day forum provided the participants with discussion sessions on the impact of the Korea-EU FTA and other possible ways to implement partnership between the two regions.

The participants cautioned against a hasty conclusion given the short amount of time since the pact went into effect, but still shared optimism about the impact the free trade pact has been making since July 1.

According to data provided at the forum, EU exports have seen a 19 percent increase since July while Korean exports to the EU have risen by 17 percent. In July this year, the EU registered a trade surplus with Korea for the first time in 10 years.

“I think the Korea-EU free trade agreement shows that this is of benefit to the two sides,” said Christian Ehler, chairman of European Parliament’s Delegation for Relations with the Korean Peninsula, during a press conference held on the sidelines of the forum.

“You would see the respected Korean industries where we implemented the chapter of the free trade agreement have rising figures, and you could easily compare them to the sectors we have not implemented which have limited figures.

“So even though it is too early to judge, it seems to work,” he said.

The pact, Korea’s largest FTA implemented so far, will remove or phase out tariffs on 96 percent of EU goods and 99 percent of Korean goods within several years. Seoul estimates the deal with the world’s largest economic bloc will increase its gross domestic product by 5.6 percent and create 253,000 jobs within 10 years.

The pact was signed in October last year, three years after the signing of the Korea-U.S. FTA, which passed the U.S. Congress last month but is still pending at the National Assembly.

“It certainly appears that Europe is more welcome than the U.S. in Korea,” said Moon Chung-in, international relations professor at Yonsei University, who chaired one of the sessions at the forum.

Pascal Kerneis, senior adviser on trade policy of Business Europe, called for the Korean government and parliament to take key regulatory changes to ensure fairer access to the Korean market.

Based on Europe’s experiences of integration, the panels also discussed economic integration among the three Northeast Asian countries through bilateral or trilateral free trade agreements, though none have yet to emerge in substantial form.

Frank Engel, member of the European Parliament’s Delegation for Relations with the Korean Peninsula, addressed problems facing Northeast Asian countries in economically integrating with each other.

The difficulties, Engel said, stemmed from the countries’ long-standing history of isolation in the region and huge differences in size and aspirations. Still, he advised the three Northeast Asian countries to look beyond the European integration model to achieve what the EU failed to do.

“The European experience teaches one thing above all: when the time for integration has come, don’t waste the moment.” Kerneis said, citing the failure to create the European Defense Community in 1954 in the face of France’s opposition.