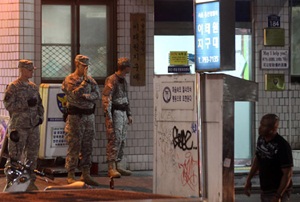 The existing off-base curfew on U.S. troops stationed in Korea will be extended until early next year to ensure better mission readiness, the commanding unit of American forces here said yesterday.

The curfew was withdrawn in July this year after it had been in place for nine years.

But in September and October, two U.S. soldiers came under investigation for sexual assault charges, and one of them was sentenced to 10 years in prison on Tuesday.

USFK said the curfew was designed as “a temporary force protection measure to ensure the continued mission readiness of the command and to assess the current operational environment.” Thurman said maintaining discipline among all troops was key.

“I firmly believe that military discipline is the foundation of mission-ready, well-trained and effective organizations,” he said. “We must maintain mission readiness and the strength of the Republic of Korea-U.S. Alliance.”

According to USFK, the curfew policy “provides the flexibility for commanders to reimpose a curfew or other restrictions as deemed appropriate due to operational or other considerations and in accordance with appropriate directives and regulations.”

“We’ve got to ensure all of our service members remain focused on our well-defined mission,” said Thurman. “Both of our nations are counting on us to deter aggression, and if that should fail, to fight tonight.”

About 28,500 U.S. soldiers serve in Korea, a legacy of the Korean War, which ended in an armistice.