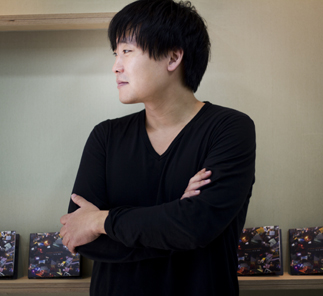 Kim Jung-bum may not be a household name, even among Koreans, but on his second solo album, “Pudditorium: Episode 2,” the composer, producer and keyboardist collaborates with notable artists from cutting-edge Brazilian guitarist Freddie Bryant and vocalist Luiz Ribeiro to Kim Thompson, a drummer in Beyonce’s all-girl band.

The album, with hints of bossa nova and progressive jazz, was released in late September.

All of this was made possible because Kim, the former leader of the pop-jazz band Pudding in the early 2000s, had mingled with musicians from around the world while studying in New York and Boston over the past seven years.

The 35-year-old musician came back to Seoul in early September after earning a master’s degree in jazz at New York University, where, in recognition of his excellence, he was given a chance to serve as a member of the undergraduate faculty while participating in the three-semester graduate-school course. 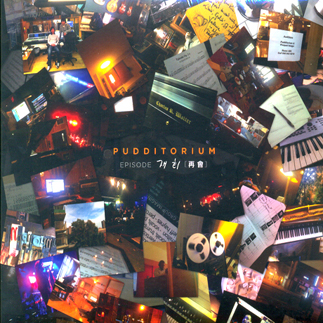 In an interview on Wednesday at a cafe in central Seoul, Kim talked about the differences and similarities between the music scene in Seoul and New York.

“The artists now dominating the progressive jazz scene in New York aren’t so much impressed by the name of a fellow musician when it comes to collaboration,” Kim said. “What counts more for them is the creative ideas the respective musicians have, and when that clicks, they can perform with anyone - regardless of whether the person is famous or not.”

Frequenting the cramped, underground jazz clubs scattered across the East Village, Kim met a number of his future collaborators, exchanged music with them and became acquainted with the music scene.

The musicians he met during this time also provided him with introductions to other musicians living in Brazil. In the end, a bunch of world-class musicians who Kim would never have imagined playing with because of the astronomical fees they normally command joined Kim for the second “Pudditorium” album.

It took Kim two years to finish the album - mainly because the recordings were all done separately in locations around the world.

Although the final stage of mixing and engineering was done in New York, seven singers, including Kim, recorded the vocal tracks in different cities.

What is even more interesting is that Kim has still not met Brazilian vocalist Fabio Cadore, who sang three songs on this album and four on the previous one, which was released two years ago. The two have only been exchanging files over the Internet, Kim said.

“Some musicians may think that the final product is what counts most, but I feel a little differently about it,” he said. “It was the whole process of making the album that was meaningful to me.”

As he did with his initial solo project, Kim composed, arranged and produced all the songs on the album, which is comprised of multilingual content. Four songs are sung in Portuguese, two in French, one in English and two in Korean. The two Korean songs on which Kim sang in falsetto - “Apology” and “Destiny” - are about his romance with his girlfriend, who he recently started seeing again.

The finishing touches that the perfectionist musician adds to each song are reminiscent of the path of a truth seeker.

Kim said he makes it a rule to listen to each song countless times and he makes incessant corrections until he is satisfied.

“I let them [the songs] go only when the time comes, when I don’t get fed up even after listening so many times,” he said.

Also, he asked the vocalists - who hail from Brazil, France and the United States - to write the lyrics for their respective songs.

The paper CD jacket contains a large square sheet with the lyrics to each song in each of the artists’ own handwriting, along with a Korean translation of each song.

Kim said he did all of the translations himself, even though he didn’t know a word of Portuguese.

“I asked some friends who can speak Portuguese to do the translations, but the outcome was far from satisfactory,” he said, displaying his perfectionist side once again. “I had no choice but to roll up my sleeves and do it myself. I struggled a lot but the lyrics were marvelously beautiful, I found.”

The collection of photos that is shown in the form of a mosaic on the album cover were all taken by Kim with his iPhone during his stay in New York.

Kim got his start in music while attending Sogang University as a business administration major.

In 1999, he won an award at the 11th Yoo Jae-ha Music Competition, a prestigious contest for amateur musicians that has produced countless K-pop composers, singers and producers.

He launched his professional career in 2003 with the pop-jazz fusion band Pudding, which he formed with a group of friends he met while serving in the Army.

After Pudding’s first album “If I Could Meet Again,” which contained mellow instrumental songs performed simply with piano, bass, guitar and percussion, started gaining fame, Kim left for Boston to study at Berklee Collge of Music. Then he moved on to New York.

Now, having relocated to Busan, his favorite city, instead of Seoul, where he was born and raised, Kim has made an unusual vow. He plans to hold three rounds of concerts in the coming year titled “Trilogie” with three different arrangements of all of the songs on the new album.

The first round of concerts is scheduled for this coming Sunday and Monday at the Jayu Theater in the Seoul Arts Center in southern Seoul.

The stage will be set up like a boxing ring so the audience can see the musicians from all four sides, an arrangement that is unprecedented for the conservative Seoul Arts Center, and the audience will be allowed to either sit or stand.

“The performers will be focusing only on the music and will make no effort to catch the eyes of the audience. That way the audience will be given a different kind of freedom,” he said. “We don’t want to force them into anything. They may sit on the ground, lovers may kiss and some may choose to walk around the venue if they feel like it.”

Kim said the next round of concerts will be performed by a classical music quartet, meaning that he will make classical music arrangements of his songs. He said he wants to keep the format of the third round of the concerts a secret.