Hanwoo takes beef to the next level

Hanwoo takes beef to the next level

The marbling of hanwoo (Korean beef) meat is top quality, according to local industry experts, providing a desirable chewiness along with tender fat. By Shin Dong-yeun

It’s no secret that Koreans love hanwoo (Korean beef), despite the meat’s rather steep price. Hanwoo refers to meat derived from a particular breed of cattle, Bos taurus coreanae, that are raised in Korea. Even if the cattle are born in Korea, if it is a different breed, it is not considered hanwoo.

Experts say that the marbling of hanwoo meat is top quality, in which the meat has a desirable chewiness but remains tender in fatty parts. According to the Ministry for Food, Agriculture, Forestry an Fisheries every 100 grams (3.5 oz) of hanwoo includes an average of 8.6 milligrams of essential amino acids while imported beef includes 6.7 milligrams.

The highest grade for hanwoo is 1++, followed by 1+, 1, 2 and 3. When buying hanwoo, experts say that the best meat has a good, bright reddish consistency in color and milky-colored fat. In terms of texture, top quality hanwoo should bounce back quickly and firmly on your fingers upon poking the meat. 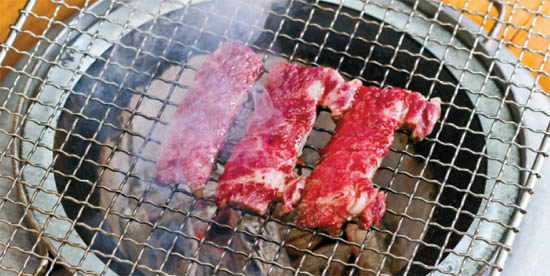 Slices of hanwoo bulgogi (Korean marinated beef) on a charcoal grill in a restaurant in Bonggye Hanwoo Bulgogi Complex in Ulsan.

In Seoul, a good place to buy top quality hanwoo at reasonable prices is Majang-dong Meat Market. Although the market sells mostly to wholesalers, individuals can shop there as well. However, individual shoppers there must purchase more than 1 kilogram of meat, so it would be a good place to come with family or friends and buy meat together. At the market, one kilogram of hanwoo sirloin is sold for an average price of 55,000 won ($49), while hanwoo galbi (short ribs) goes for around 38,000 won. The main sellers at the market are Geum Hanwoo (02-2295-0021), Jeontong Hanwoo (02-2291-9797), Yeongsuk Chuksan (02-2297-0153) and Mesan Hanwoo (02-2291-8114).

Outside Seoul, there have been a handful of hanwoo villages popping up nationwide, in recent years.

The hanwoo villages, comprising of butcher shops and hanwoo restaurants, are particularly prominent in the Daegu and North Gyeongsang regions. Industry estimates say that there are over 700,000 cows being raised in those areas, making up 20 percent of all hanwoo production in the country.

Last winter however, the Daegu and North Gyeongsang regions suffered from the aftermath of the widespread foot-and-mouth disease which shook the nation, in which mass slaughtering and burial of cattle took place. 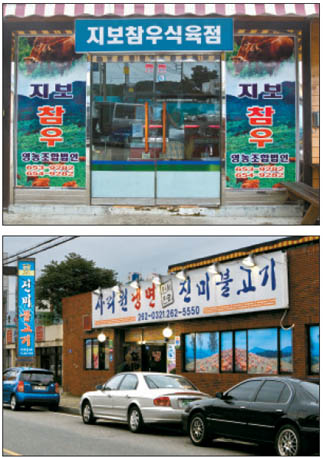 The bulgogi (Korean marinated beef) sold in Bonggye, Ulsan, is not the kind you see in Seoul.

This bulgogi, instead of being marinated in a soy sauce concoction, is lightly salted and then grilled on the spot using oak tree bektan, which is a high quality charcoal. After grilling, the beef is dipped lightly in sesame oil.

In 2006, 31 cattle farms in Jibo-myeon, Yecheon county in North Gyeongsang, got together to create a hanwoo village. There is only one restaurant in the hanwoo village, which was built by farmers using recycled furniture in order to save on initial costs.

All the hanwoo farmers involved get their cattle butchered in the Yecheon slaughterhouse and take them to the Chamwoo Village restaurant to sell.

Although the village has just one restaurant its yearly revenue is over 10 billion won.

“We launched this hanwoo village in order to promote the town and yield profits by using top quality hanwoo raised by the area’s farmers themselves, which consumers can trust,” said Choi Byeong-yong, 50, head of the Chamwoo Village Farmers’ Association.

Choi said that the farmers use environmentally friendly feed for the cattle and techniques they learned from the Rural Development Administration. 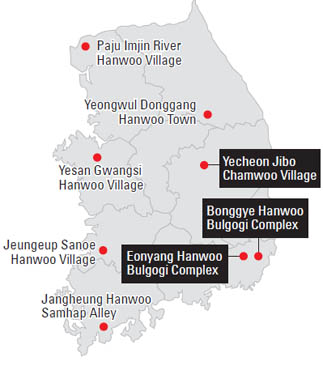 Last month, the village saw a new restaurant open, in which hanok (traditional Korean house) lodging will be completed nearby.

The farmers’ association said that they plan to provide free lodging for those who buy hanwoo from the new restaurant. The price for the village’s hanwoo is 6,000 won for 100 grams of 1+ grade meat.

This hanwoo village in Eonyang boasts a history of over 50 years. Since the 1930s, the area had well-known slaughterhouses.

It was during the 1960s however, when construction workers building the Gyeongbu Expressway started dining at its hanwoo restaurants, that the village’s reputation as a bulgogi town started to form.

Eonyang is close to Bonggye hanwoo village but the bulgogi sold in the two areas tastes completely different.

While Bonggye’s salted bulgogi is closer to barbecue, Eonyang’s bulgogi is marinated in soy sauce, garlic, sugar and sesame oil using various beef parts, which are thinly cut to 0.3 centimeters. The beef is then grilled on a charcoal fire.

The hanwoo bulgogi I tasted in Eonyang’s Sariwon Jinmi Bulgogi restaurant, was very tender and sweet. For most restaurants in the complex, 200 grams of 1+ grade hanwoo goes for around 16,000 won.