Chaebol told no on tofu, other items

Chaebol told no on tofu, other items 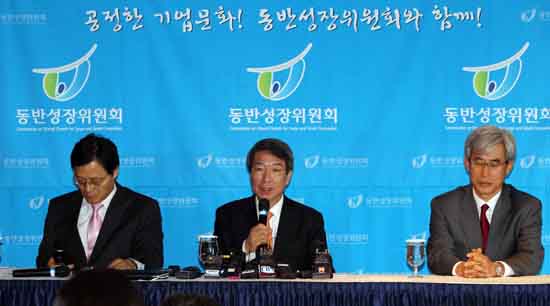 Chung Un-chan, chairman of the Presidential Commission for Shared Growth for Large and Small Companies, middle, announces 25 business items exclusively for small businesses as well as guidelines for shared growth at a meeting at L-Tower in Yangjae, southern Seoul yesterday. [YONHAP]

Conglomerates will be restricted from expanding businesses in tofu, salted seaweed and LED lighting.

While conglomerates reluctantly accepted the proposal, which is part of the larger shared-growth campaign, medium-sized players expressed frustrations regarding the government’s limitation on such businesses.

This was the second announcement made by the committee. The first announcement that restricted conglomerates from expanding in 16 businesses such as gochujang, or red pepper paste, and makgeolli (traditional rice beer) was made in September. 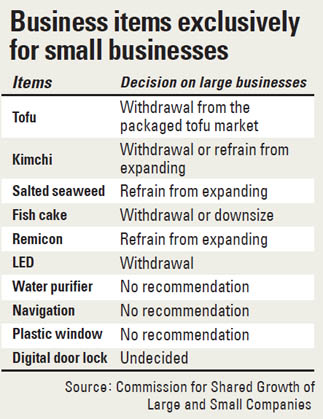 Yesterday’s list included controversial areas that weren’t decided upon in the first announcement. On the 25 items, the commission’s recommendations for large companies included withdrawing, downsizing, refraining from expanding or entering new areas.

In the food industry, tofu, kimchi, salted seaweed and fish cakes have been the hotly-debated items. For the tofu market, conglomerates are recommended not to expand their businesses at the current level, especially in the packaged tofu market. After the announcement, the country’s largest food manufacturer CJ Cheiljedang said it will follow the commission’s decision.

“We have been cooperating with the commission,” Lee Eun-young from the company said. “We agree to the purpose of the government’s shared growth policy, so we voluntarily decided to withdraw from the packaged tofu market.”

Meanwhile, medium-size food maker Pulmuone hasn’t reached an agreement with the commission. “We have to decrease our market share from the current 80 percent to around 50 percent,” an official from the company asking for anonymity said. “We agree to the aim of the shared-growth policy, but the decision is not what we exactly wanted,” the official said.

After the announcement the ready-mixed concrete (remicon) industry saw a larger conflict. The commission recommended existing large remicon builders refrain from expanding their business. It also mentioned new large companies would be better off not entering the market. Small remicon companies welcomed the commission decision, but large ones didn’t.

“We pursue co-prosperity with large companies,” an official from Korea Federation of Ready Mixed Concrete Industry Co-operatives said. “Large companies jump into the remicon market and want to expand it further. But we don’t want to increase the market excessively, because, that way, small companies will be crowded out by large ones.”

At the same time, the association of large remicon companies claims that the decision violates the initial purpose of the shared-growth policy.

“Currently, small remicon makers account for 69 percent of the market, while large ones make up the other 31 percent,” Kim Jang-soo from Korea Ready Mixed Concrete Industry Association said.