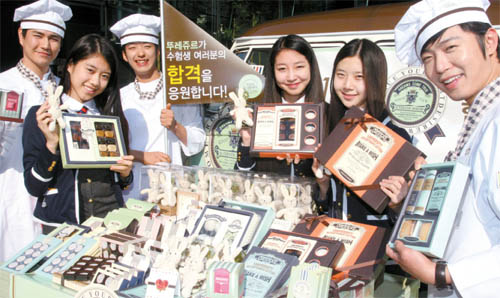 With the College Scholastic Ability Test (CSAT) due in less than a week, last-minute sales promotions for items aimed at helping, inspiring or comforting students as they prepare for the exam are seeing brisk business.

This year, a variety of effective and practical - and cute - products have hit both online and offline markets. But a number of staple items, like the traditional candy yeot and chocolate, are less prominent this year, online retailers said.

They said the three key words that represent the new trend for CSAT gifts are useful, health-conscious and creative.

According to the online shopping industry, sales of CSAT items have been sharply rising since July, and especially since the final 100-day countdown to the grueling exam began.

“Our sales began soaring from 100 days before the test, and July sales jumped by a whopping 450 percent on-month,” said Park Ji-na, who works at 11st (as in, 11th Street), an SK Telecom subsidiary and the country’s second-largest shopping Web site.

Gmarket and Auction, the nation’s No.1 and No.2 online retailers with a combined 72 percent market share, have not released sales figures but also said sales had been surprisingly strong.

The following are some of the popular items that have been selling like hot cakes among students awaiting the national exam and their families.

A temporary product dubbed the Smart Watch that was designed for CSAT students is being touted as a must-have item for examinees, who will be fighting against time for an entire day when they sit the test in five days’ time.

“Sales of the smart watch are gaining traction because it doesn’t disturb sensitive or nervous students, as the ticking sound has been eliminated to help them concentrate,” Park said.

The watch face not only shows the time but also indications of when students should move on to the next test subject and how many minutes are assigned for each one, she said.

The Smart Watch was designed specifically for CSAT examinees. Provided by the companies.Bonjuk’s Bulnakjuk (beef-octopus porridge) is rich in amino acids, vitamins and minerals that boost memory power, while a math-formula cushion encourages students to cram before bedtime.

Meanwhile, a comfortable cushion has 34 key math formulas, such as Pythagoras’ theorem, written on it.

Owners can take a nap on the cushion after chewing over the formulas to aid memory retention, based on the argument that memorizing information before going to bed is an effective way of ingraining it into one’s mental hard drive.

Additionally, a new alarm clock has introduced a novel way of waking up groggy and sleep-deprived students up by including a game that forces them to focus on shooting a target successfully in order to turn the alarm off.

As students tend to let their healthy eating habits fall to the wayside in the run-up to the exam, porridge chain Bonjuk launched a new product called Bulnakjuk containing both bulgogi (beef) and nakji (small octopus). The new arrival has sold over 10,000 units since it was launched one month ago, the company said.

“Students also like abalone or tuna porridge as they are widely known to be both nutritious and rich in DHA,” said Bonjuk staffer Jin So-young. DHA, or docosahexaenoic acid, is an omega-3 fatty acid often found in fish oil supplements.

The company’s overall sales surged 320 percent in October as it staged an event delivering porridge for breakfast and late-night meals for students, the company said.

Other healthy products including red ginseng are also popular, according to Gmarket, adding that research suggests they reduce eye fatigue and enhance brain activity.

Aromatica, Korea’s first organic cosmetics maker, has put its Focus & Stress Free roll-on stick on a special promotional sale for CSAT applicants to help relax them with the aid of aromatherapy.