Shoplifting at retailers among worst in region

Shoplifting at retailers among worst in region 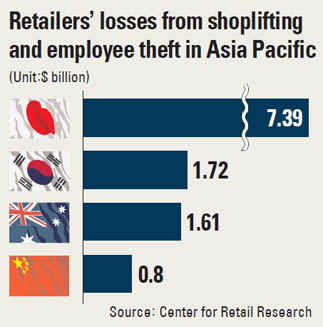 Shoplifting has always been a thorn in the side for retailers but it turns out the situation is more serious in Korea than most other Asian countries.

According to a report by the Center for Retail Research, Korea ranked No. 2 in the Asia-Pacific region for losses stemming from customer and employee theft. Between July 2010 and June 2011, Korean retailers lost $1.72 billion to this growing scourge.

The study, released in Korea on Thursday by the world’s largest retail study organization, showed that Japan was the hardest hit with losses totaling $7.39 billion in the stated period.

Of the total, shoplifters accounted for $5.6 billion and $1.7 billion was pilfered by retail workers.

For Korea, the survey of 32 retailers operating 2,184 outlets here showed that the same ratio was weighed 70 percent in favor of customers. Domestic companies lost $1.2 billion from shoplifting and $0.52 billion from within their own ranks, according to the data.

“In the Asia-Pacific region, shoplifting is the No.1 cause and employee theft is the second main source of retail losses,” Ng said on Thursday. “Ten countries in the region lost a total of $13.89 billion to theft.”

Industry sources said the report is significant given that it is the first time that Korea was included in the research. They said this will help companies assess the risks to which they are exposed.

“When customers are caught stealing, we begin by politely asking them to purchase the pocketed items,” said Kim Dae-jin, an official at Uniqlo Korea.

“We only report it to the police when the customer refuses to pay,” Kim added. “But in most cases, they would rather cough up the money.”

Although Kim declined to provide an exact amount of the losses incurred, he said that Uniqlo Korea officially began installing detection sensors at store entrances and exits in 2006. This move quickly followed Uniqlo’s entrance into the market in September 2005. Now all of its stores are equipped with such sensors.

“We conduct bag checks on employees before they leave work on a daily basis to deter thieves,” Kim said. “Department stores and discount stores here do the same.”

The center this year surveyed key trends of internal and administrative error, and supplier and vendor fraud, among 1,197 retailers in 43 countries.