A possible cure for diabetes?

A possible cure for diabetes? 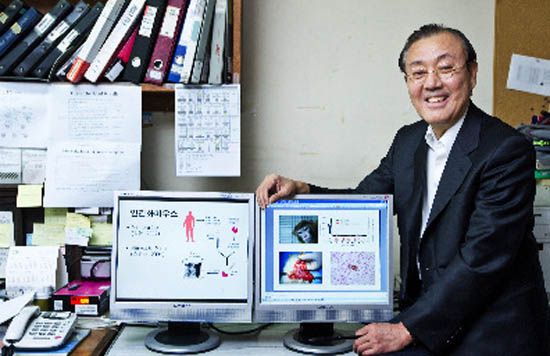 Park Sung-hoe, professor of pathology at the Seoul National University College of Medicine, shows a diagram for pig cells transplanted into a human body in his office, Wednesday. By Kim Seong-ryong

“Monkeys are the species closest to humans. I believe that the same effects will occur in human diabetic patients who receive pig islets transplants,” said Professor Park Sung-hoe, 64, in an interview with the JoongAng Ilbo on Wednesday.

The Seoul National University (SNU) College of Medicine professor and his research team revealed they have injected monkeys with pigs’ islets, which contain hormone-producing cells, to cure diabetes in the primates, bringing treatment of diabetes in humans much closer to becoming a reality. Personal reasons sparked the professor to take on the challenge of finding a cure for diabetes some eight years ago. Both his grandmother, who raised him after his mother’s death when he was in elementary school, and his father passed away from diabetes-related conditions. His wife, too, has diabetes and Park has prediabetes, meaning he is in the stage before diabetes.

Park is no stranger to physical ailments. In high school he suffered from a ringing in his ears, and in medical school he was diagnosed with Basedow’s disease, an autoimmune disease resulting in overactive thyroids (also known as Grave’s disease). His children also suffer from similar illnesses, so he was driven to research rejection of transplants, immunology and immunogenetics, which is the relationship between the immune system and genetics.

All of this has been the impetus for his research. “If there is something unsatisfactory about your research data, just rip it up and throw it away,” Park tells his students and juniors. “It’s the duty of a researcher to get rid of wrong data, despite sentimental attachments to it.”

Park’s research team injected gnotobiotic pig’s islets into the livers of eight monkeys. Once introduced into the recipient’s liver, the islet cells release insulin. A gnotobiotic pig is a laboratory-reared pig with controlled strains of bacteria and microorganisms present in its system. Pigs’ organs are often used in treatment of diabetes in humans because porcine insulin and human insulin are almost identical.

Out of the eight monkeys that received treatment, four could be classified as cured from diabetes. The research team said that before the insulin-secreting pig cells were transplanted into the monkey livers, the monkey’s blood glucose level in the liver exceeded 450 milligrams per deciliter (mg/dL) but after transplant, the blood glucose level dropped to the normal range of 83 mg/dL and has continued to maintain this level for the past seven months. Even three months after the discontinuance of immunosuppressant drugs, these monkeys maintained stabilized blood glucose levels. The research team further said that it is possible that the monkeys would be able to maintain their normal insulin level for life.

“Even in the worst case scenario, I estimate that the effects of the transplant will last one to two years. Though more research has to be done, I believe the cure will be permanent,” said Park.

Until now, the greatest obstacle in organ transplants was graft rejection. Often the transplant recipient’s immune system rejects and attacks the transplanted organ or tissues. In such a case, recipients of the transplant are administered immunosuppressant drugs. Park revealed that the decisive factor in his team’s successful outcome was the usage of a newly invented immune response-controlling antibody.

Currently, SNU and Dinona Inc., a biotech company, are in the process of conducting research to incorporate the antibody into a treatment. Park said, “This is the first time worldwide that after an organ transplant between different species and the subsequent cutting off of immunosuppressant injections that rejection symptoms did not occur.”

While the research team states that the results of their experiments indicate that using pig islet transplants to cure diabetes is possible in humans, there still will be many obstacles to overcome, such as the possibility of harmful contamination between pig and humans, as well as receiving approval from the Korea Food and Drug Administration.

There is “very little chance” that humans may be infected with bacteria from pigs, reassured Park, since the gnotobiotic pigs used in the experiment have been reared in a controlled laboratory environment and have undergone microbiological examinations. On Friday, an SNU School of Medicine discussion for experts was held for national immunology and endocrinologist experts to discuss and verify the results of his experiment. From 2013 Park plans to start clinical tests on humans.