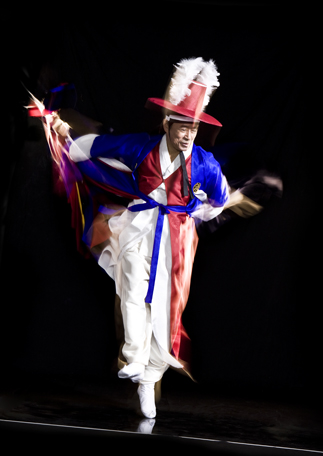 Cho Heung-dong and Kook Soo-ho are two prominent figures in Korean traditional dance. They have been promoting traditional dancing for 20 years. Up until now their strong rivalry has made it impossible to imagine these two dancing on the same stage.

The only exception was in 2007, when a 100-year commemoration performance was arranged for Choi Seung-hee and Cho Taek-won. Even then a slight sense of tension resonated.

Finally, the two are appearing on stage together. On Nov. 19, “Palmujeon” will be performed at KOUS (Korea Cultural House) on Teheran Street in Gangnam District, southern Seoul. Cho, 70, will be dancing Jinsoechum and Kook, 63, Ipchum.

The dancing community is looking forward to the appearance of such big names.


Only one true leader

Cho and Kook both graduated from the Sorabol School of Arts (now Chung Ang University) and performed together at the National Dance Company of Korea (NTOK). Back then they were close friends.

“We would sneak out of our practice rooms and enjoy a few melodic tunes at a nearby pub. The last ones standing were always Kook and I,” said Cho.

The relationship between the two started faltering in the early 90s. Success was the main problem. At the time, the father of Korean traditional dance was Song Beom (1926-2007), who led NTOK for 30 years. However, beginning in the 90s, Song’s stronghold started cracking, and the focus was on who the next leader would be. Song showed special interest in young Kook, giving him many leading roles.

Because of this most thought that Kook would become the upcoming leader. Surprisingly enough, it was Cho who was chosen as the second leader of the dance company. Eventually Kook was appointed as the leader after three years.

Cho was born into a high-ranking family in Icheon, Gyeonggi. He has four older sisters. They said “Even their father didn’t expect his only son to fall for dancing.”

Cho had a passion for dancing. He learned Cheoyongmu and Chunaengmu from Kim Cheon-heung, Seungmu and Salpurichum from Han Young-suk, and Janggeommu from Kim Baek-bong. Cho had a total of 17 mentors. He embodied the dance movements that he learned. As a result, Cho’s own delicate and precise dance moves were born.

Kook is from Jeonju, North Jeolla. Though stubborn and rough, he has a spell that attracts people. He was also a theater major in college, dominating the stage with his height and passionate expression. This was how he was assigned a leading role at once.

Kook’s ability shines in his choreography. At the age of 40, he choreographed the opening ceremony of the 1988 Seoul Olympics. Spectacular masculinity and grandiosity is a trademark of Kook’s dance.

Cho has been the chairman of the Dance Association of Korea for 14 years. Keeping the position in an industry where there are a lot of ups and downs shows Cho’s temperate leadership. He has also been leading the Gyeonggi Provincial Dance Company for 11 years. 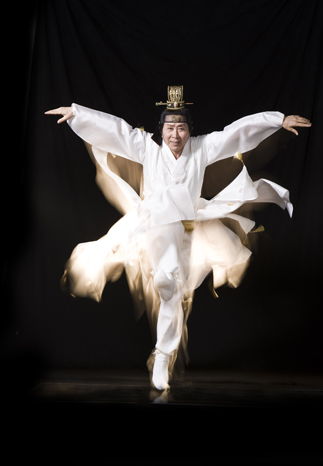 Kook has been standing in front of the platform of college classrooms since his late 20s. His choreography is not simply a work of his imagination, but a result of thorough historic research and detailed facts. “Gwanggaeto Daewang” and “Myeongseong Hwanghu” are among Kook’s major works.

Kook and Cho aim to “revive the currently depressed Korean traditional dance” and “present the originality of tradition” through their joint performance.