To kill FTA, DP proposes putting it on the ballot

To kill FTA, DP proposes putting it on the ballot 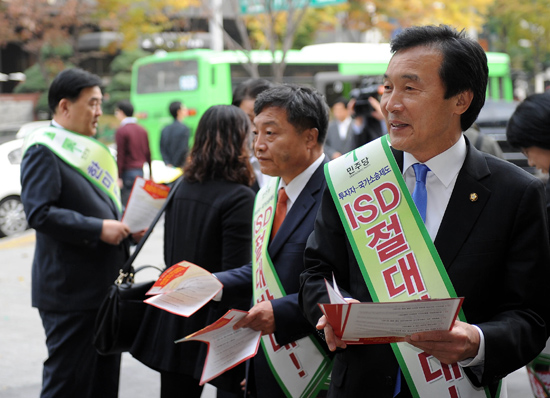 Representative Sohn Hak-kyu, chairman of the Democratic Party, hands out anti-FTA leaflets to passers-by yesterday at Yeouido Station in Seoul. DP lawmakers took to the streets yesterday to dissuade citizens from supporting the free trade agreement with the United States. [NEWSIS]

With the Democratic Party taking to the streets yesterday with leaflets in hand to build support for blocking the Korea-U.S. free trade agreement, the party’s chairman, Representative Sohn Hak-kyu, suggested putting the FTA on the ballot as a referendum.

Sohn and 20 other DP members, including Representatives Chung Dong-young and Chung Sye-kyun, gathered in Yeouido yesterday morning to launch a street campaign, which will continue in Myeong-dong today and at a farmers’ market in Sangam-dong tomorrow, party officials said.

“As problems with the Korea-U.S. FTA, such as the ISD provision, are known, negative public sentiment to it is rising and a consensus to re-renegotiate [the deal] is spreading,” Sohn said, referring to the FTA’s provision on investor-state dispute settlements, which has become a lightning rod of criticism from the opposition. “The 19th general election [in April 2012] or a referendum can be a way [of dealing with the FTA].”

The proposal came a day after a scheduled plenary session at the National Assembly was abruptly canceled because of heightening tensions over the FTA’s ratification. The FTA, which was signed in 2007 and renegotiated last year, passed the U.S. Congress last month but is pending at the Foreign Affairs, Trade and Unification Committee here in Korea. 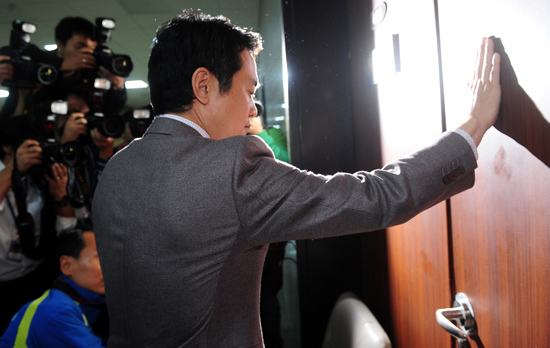 Representative Nam Kyung-pil, chairman of the Foreign Affairs, Trade and Unification Committee, looks at the conference room door that opposition lawmakers locked from the inside to block the passage of the FTA bill in committee. [NEWSIS]

A DP official said a referendum on the FTA was possible, citing the first clause of the country’s election law that allows important policies on foreign affairs, defense and unification to be placed on a referendum.

Political analysts said the DP’s proposal appeared to be an attempt to both win the upcoming general election and block the FTA’s ratification.

“[The public] made the National Assembly to place to resolve such conflicts,” Nam said.

Other GNP members criticized the DP for its opposition to the FTA, with Representative Lee Ju-young, the GNP’s chief policymaker, calling the major opposition party “brainless.”

Representative Hwang Woo-yea, GNP floor leader, said the ruling party would continue efforts for dialogue and negotiation but warned that it would not wait for cooperation, alluding to the possibility of having the speaker directly introduce the bill to the National Assembly for a floor vote. “We will try to get [the bill] processed as soon as possible,” Hwang said.

Prime Minister Kim Hwang-sik also expressed regret about the protracted parliamentary feud over the ratification of the FTA.

“I think it is very regrettable that the principle of majority, the basis of democracy, is not functioning at the National Assembly,” Kim said at a national policy coordination meeting yesterday.

The prime minister also commented on the DP’s opposition to the ISD, saying that the ISD provision was a global standard to ensure safety of investments - something Korea already has in trade pacts with some 80 countries.

“Claiming that such a reasonable system would be managed in a distorted way and in favor of the United States is a shameful act that undermines our international status and dignity as we strive to be an advanced, top-notch country,” Hwang said.