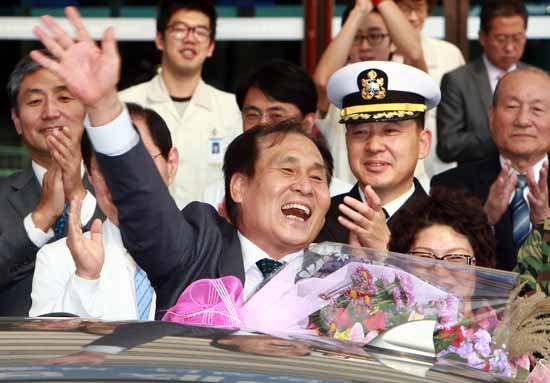 Seok Hae-kyun, center, the heroic captain of Samho Jewelry, waves yesterday after being discharged from a local hospital over nine months since he was admitted for gunshot wounds. By Kang Jung-hyun

Seok Hae-kyun, the heroic captain of a Korean freighter hijacked by Somali pirates and rescued in a naval operation earlier this year, was released from Ajou University Hospital yesterday after over nine months of treatment for gunshot wounds.

Seok, who captained the 11,500-ton Samho Jewelry, was shot several times by pirates during the rescue in January and has gone through several rounds of surgery. Eight pirates were killed and five others were captured in the successful naval operation, with 20 other Samho Jewelry crewmembers rescued unscathed.

Seok has been credited with ensuring a successful rescue by stalling for time by zigzagging the ship after armed pirates ordered he move the vessel toward the Somali coast.

His courage made him a national hero in Korea and recently earned him a state order called the Dongbaek Medal of the Order of Civil Merit.