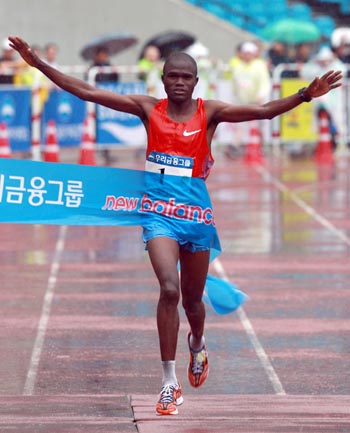 In a course that spans the city of Seoul and Seongnam, Gyeonggi, Kwambai was the first marathoner to cross the finish line at Jamsil Stadium with a time of 2 hours, 8 minutes, 50 seconds followed by Kiyeng, who clocked in at 2:09:21. Ethiopia’s Yemane Tsegay took third at 2:10:47.

Kwambai cashed in $50,000 for his title and celebrated his first full-course international marathon victory since the 2006 Beijing Marathon.

And with the win, the Kenyan, who holds world’s sixth-best record at 2:04:27, vindicated his runner-up finishes in past years. He finished second in the 2007 Boston Marathon, 2008 Berlin Marathon and 2009 Rotterdam Marathon.

In a race that was held amid rainy weather, Kwambai was running with a group behind Morocco’s Hafid Chani, who was taking charge until 20 kilometers. But with Kiyeng and Tsegay, Kwambai passed Chani from 30 kilometers and started a three-horse race.

But the competition didn’t last long since Kwambai took the lead from the 34-kilometer spot and didn’t slow down until the end with his final spurt as he ran the last five kilometers in 14 minutes.

Kwambai, who is on his first visit to Korea, said he could have clocked in a time range of two hours and six minutes if the weather was better, but added he was happy to get the win.

With Kwambai and Kiyeng taking first and second, the domination of Kenyan marathoners in recent years was proven again in this event as six of the top 10 finishers were Kenyan.

Korea athletics saw one bright light from 21-year-old marathoner Lee Hyun-Kang, who was the fastest Korean yesterday, finishing 42.195 kilometers in a time of 2:17:21. He was 27 seconds faster than his teammate Kim Jae-hun to take the domestic title.

Lee was running his first full-course marathon but managed to finish ahead of more experienced marathoners such as the 2010 Guangzhou Asian Games gold medalist Ji Young-jun, who finished third among Koreans at 2:18:39.

“I never ran over 30 kilometers even during my trainings,” Lee said to the JoongAng Ilbo, which also hosted the event, yesterday.

“Finishing full course is even a surprise to me, but winning the event is such a special memory that I will never forget.”

In the women’s domestic race, Choi Kyung-hee, 30, topped the race at 2:40:49 while Japan’s Masayuki Highuchi took the wheelchair marathon title at 1:30:59.

Meanwhile, the organizers said that a total of 21,188 runners took part in this year’s event, 326 of whom were foreigners.