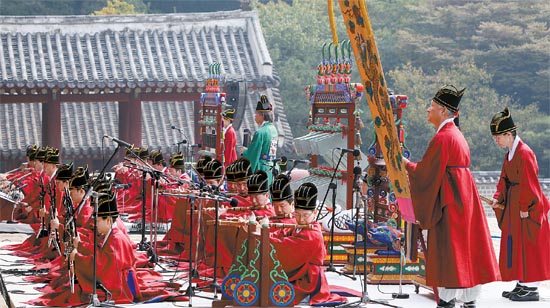 
Traditional Korean music is sometimes overlooked in the excitement generated by pop culture and the Korean Wave, but the release last month of the album “Jongmyo Jeryeak. Ritual Music for the Royal Ancestors” and the book “Korean Art Song” promise to draw attention back to the genre while providing valuable insight with the aid of English-language translations.

The album, produced by Radio France through its Ocora label, is the first album of music for Jongmyo Jeryeak, ritual music performed for Confucian ancestral worship rites, with explanations in French, English and Korean.

It was recorded during a performance by musicians from the National Gugak Center in 2003. The album is the first audio recording of the entire ritual with an explanation in the three languages. It is accompanied by photos of performances at the shrine.

Radio France, which has introduced traditional Asian music since 1980, aims to release one or two albums of traditional Korean music every year for the next decade as part of its Korean music project. For its first album, it chose Jongmyo Jeryeak and enlisted the aid of a Korean music producer, Kim Sun-kuk of Just Music.

“It sounds like noble, refined music, hieratic at times yet always full of dignity. I am pleased to start our cooperation with such a musical standard,” the producer of Radio France said, according to a press release from Just Music.

The Jongmyo Jeryeak (Important Intangible Cultural Heritage No. 1) is a set of music and dances for rites at Jongmyo, the royal ancestral shrine of the Joseon Dynasty (1392-1910). Though originally performed five times a year, it is now performed once a year on the first Sunday in May at the Jongmyo Shrine in central Seoul.

The Jongmyo Shrine was designated as a World Cultural Heritage site by Unesco in 1994 and as a Masterpiece of the Oral and Intangible Heritage of Humanity by the same organization in 2001. 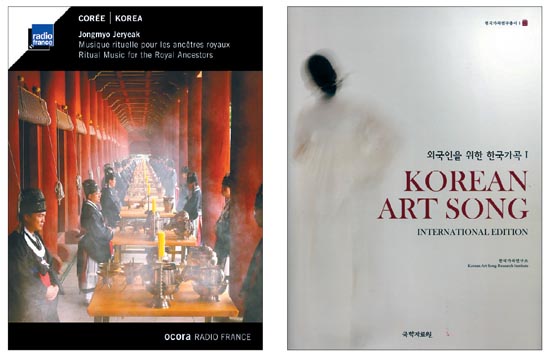 The Jongmyo Jerye-ak album (left) has all 27 songs of the genre and comes with a detailed explanation in French, English and Korean. Provided by Just Music
“Korean Art Song” (right) is a compilation of gagok (modern Korean songs) Provided by the Korean Art Song Research Institute


The album consists of 27 pieces of music composed during the reign of King Sejong (1397-1450). Each piece features poetic lyrics that exalt the achievements and virtuous actions of the kings that previously ruled Joseon, including King Taejo (1335-1408), the founding father of the dynasty, and King Taejong (1367-1422), the father of King Sejong.

The album will be distributed through Harmonia Mundi, an independent French music label devoted to classical and world music, which has a distribution network in 63 different countries.

Meanwhile, the book “Korean Art Song” provides the music and lyrics for 35 songs in gagok music, which was popular in the early to mid-20th century.

Gagok is music that was originally composed to accompany sijo (a traditional poetic form) yet later came to accompany other modern poetic forms. It is similar to pansori (narrative singing) in style, but unlike pansori, which was enjoyed by the general public, sijo was produced for the aristocracy. Gagok was accompanied by wind and string instruments including, the piri, a Korean pipe, and gayageum and geomungo, both of which are string instruments from the zither family.

The songs are presented in four sections organized around the song lyrics: “My Homeland,” “My Heart, My Soul,” “Love Songs” and “My Dear Songs.”

The lyrics to the songs were written by renowned Koreans including poets Kim So-wol and Lee Eun-sang and the melodies were composed by notable musicians such as Hong Nan-pa and Yun I-sang and many more.

Four of the songs have lyrics by poet Kim So-wol, who is most well known for his poem “Azaleas” (1925), which describes his desire for Korea’s independence from Japanese colonial rule. Another of his poems, “Flowers on the Mountain” (1925), which compares flowers blooming on a mountain that people rarely see with the solitary lives of human beings, appears in this book twice with music by two different composers.

The Korean Art Song Research Institute is planning to publish more books featuring other musical genres, according to Choi Young-sik, director of the institute.