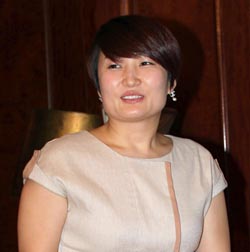 Entertainer Park Kyung-lim has reportedly made a donation to the hospital where she stayed after her miscarriage in order to help newborn babies and their parents.

Her agency, On-Air Entertainment, confirmed on Saturday that Park, 32, donated 100 million won ($90,000) to Cheil Hospital in northern Seoul to help newborn babies. The agency said that it didn’t know of Park’s donation until it saw the reports in the Korean media.

“While in the hospital, Park heard touching stories from other parents who were suffering from financial difficulties,” the entertainment agency said over the weekend. “She talked with her husband and they decided to help babies and their parents with this donation.”

Park married in 2007 and had her first son in January 2009. She announced she was pregnant with her second child in April, but was hospitalized last month for a miscarriage.

The agency revealed that Park is expected to resume her acting career next year.