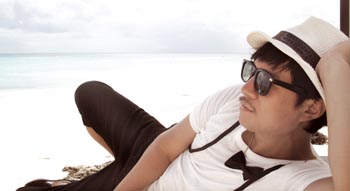 Singer Kim Sung-soo, of the K-pop band Cool, has denied charges that he assaulted a woman, saying he did not attack her in his home.

Kim, 43, was accused of assault by his ex-girlfriend, who on Friday asked Gangnam District Police in southern Seoul to investigate the incident.

According to police, the woman claimed she was beaten by Kim at his house on Oct. 31. Police said she had gone there to reconcile with Kim after fighting with him over the phone the day before.

On Saturday, Kim released a statement through his agency refuting her report, saying that she broke into his house and was drunk on the day of the incident. Kim also denied her accusation that he threatened her with a golf club.

“It wasn’t appropriate to talk with her since she was drunk, so I asked to talk later, but she started to behave in an unruly manner,” Kim said in the statement. “So I pushed her to get her to leave my house, but there was no kicking or any other kind of physical violence.”

Kim said the couple had broken up early this year but got back together again last month.

Police said they will investigate the incident and plan to summon Kim for a hearing.

Kim has been out of the limelight but was recently cast on the SBS Plus show “Comeback Show Top 10.” He and his wife divorced last September after six years, and this September it was revealed that Kim’s house was up for auction.