The person who gives you your ‘I do’

The person who gives you your ‘I do’ 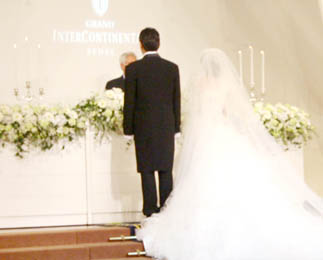 For a prospective bride and groom, the wedding ceremony is probably one of the biggest events of their lives, and finding the right person to officiate the ceremony and deliver a memorable message is an important element.

In countries like the United States, marriage officiants need to have a license or appropriate ordination as required by state law. In Korea, however, almost anyone can become a marriage officiant, or jurye, though there are a few notable exceptions under the election law. This law prohibits politicians, government officials, candidates and prospective candidates from performing a wedding ceremony in a relevant constituency as it could be seen as pre-election campaigning.

According to Korean custom, the groom is responsible for finding someone to perform the ceremony and he will usually ask a teacher, professor or even his boss to do the job. If both bride and groom are religious, they will often ask their religious leader.

In recent years, however, Korean couples have begun hiring people they have never met to officiate the ceremony by engaging marriage officiant services. The popularity of such services is increasing, according to wedding industry sources, and most companies allow users to pick an officiant with a single click. In fact, when the Korean word for “officiant” is typed into Internet search engines, more than a hundred such companies come up.

Services such as these have made the process of finding an officiant both less expensive and less cumbersome. Traditionally, couples visit their marriage officiant at least twice: once before the marriage and once after the honeymoon. On each visit, couples give the officiant a valuable present such as electronics, a suit or gift cards.

With the marriage officiant service, however, the 100,000 to 200,000 won ($90 to $180) fee is cheap compared to the amount one would spend on gifts. Couples are not required to visit the officiant and the entire process is said to be fast and easy.