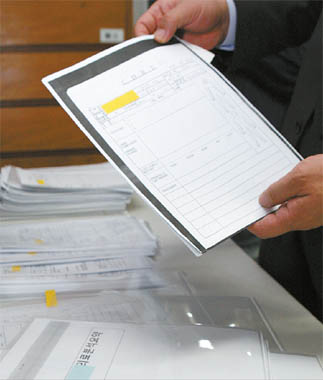 An empty medical chart was among the evidence seized by police in the massive insurance fraud in Taebaek, Gangwon. [YONHAP]

Police in Gangwon have uncovered a massive fraud ring involving some 400 people in the city of Taebaek who filed falsified medical insurance claims to reap billions of won in reimbursements.

The fraud involved residents who, with the help of hospitals and insurance agents, posed as fake patients and submitted falsified hospitalization records to insurance companies, defrauding insurance companies and the National Health Insurance Corporation out of a total of 15 billion won ($13.4 million).

In a particularly egregious case, a 56-year-old Samsu-dong resident surnamed Yoon claimed to have been hospitalized 37 times between June 2005 and February 2011 for arthritis and diabetes for a total of 889 days. Police found that her entire family also claimed to have been hospitalized in the same period: 585 days for Yoon’s husband, 389 days for her daughter, 113 days for a son and 44 days for her son-in-law.

In total, the family received about 250 million won from their insurance company as reimbursement for 2,020 days of hospitalization.

In reality, police said the family, who was fully insured, was never actually hospitalized in that time.

In addition to residents who pocketed money with fraudulent claims, the police said the three hospitals that issued falsified hospital records made 1.7 billion won from the National Health Insurance Corp. by requesting reimbursements for 330 patients.

Several insurance agents, meanwhile, made money by convincing family members to sign up as clients. In turn, the insurance agents introduced their new clients to hospitals willing to create fake hospitalization records and taught them how to submit the necessary documents to receive insurance money.

The police said the residents were pulled into the plot because of the poor economy in Taebaek, which has seen its population decline over the past decade to just 50,000 people.

The hospitals and insurance agents in the fraud said they became involved because they were in danger of closing from the weak economy.

Police said that under questioning, which started Thursday, most of the charged residents also testified that they participated in the scheme to pay off debts or other expenses.

One suspect, a college student surnamed Kim, told police that she received 45 million won by faking a snowboarding injury because she needed money to pay her tuition.

Police said they would continue their investigation for more possible insurance fraud in Gangwon.

The fraud was uncovered after a Gangwon police inspector, Kim Dong-hyuk, received a tip in early October from a Samsu-dong resident, who told him, “There is a rumor in the town that you must be a fool if you can’t get insurance money in Taebaek.”