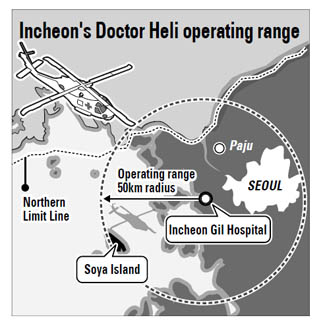 A 69-year-old resident of remote Soya Island in Ongjin County, Incheon, drew his final, labored breaths last month waiting for medical help that, though promised by the government, would never arrive.

The man, surnamed Song, had difficulty breathing at around 7 a.m. on Oct. 28, and staff from the local Soya Community Health Clinic rushed to his aid, according to Ongjin County on Friday. At around 7:30 a.m., medical staff called the air ambulance control center at Incheon’s Gil Hospital to request urgent medical transport, Song’s life hanging in the balance. But no one answered the phone.

With no time to spare, medical staff called the national emergency call center at 119 for help. Upon receiving a report from 119, the Incheon Coast Guard dispatched a helicopter from its base on Yeongjong Island. That was 7:55 a.m. But the helicopter was trapped by thick fog and could not reach Song, who drew his last breath at around 8:15 a.m. A marine vessel sent by the Coast Guard as an alternative did not arrive on the island until 9:25 a.m., an hour after Song’s death.

With patients like Song in mind, the government launched the country’s first air ambulance service in September, aimed at quickly transporting sick island residents to nearby hospitals in emergency situations. The Ministry of Health and Welfare said that the two helicopters in the program, nicknamed “Doctor Heli,” could depart with a doctor onboard within five minute of receiving a call for help.

But a series of events made this impossible on the morning of Oct. 28.

Though an air traffic controller at Gil Hospital routinely comes to work at 6:30 a.m., he was away from his desk when the 7:30 a.m. call came on that fateful morning last month. “He was away from his seat for a short while to make preparations for the helicopter,” an official from the control center said.

And even after the 119 rescue service reached the helicopter control center at 7:46 a.m., Doctor Heli was unavailable for use, the official said.

According to the official, Doctor Heli is sent to Gimpo Airport during the night for maintenance and are on call starting at 8 a.m. from one of two locations: Munhak Sports Complex or a heliport at Incheon City Hall. Air traffic controllers are stationed at Gil Hospital and Mokpo Hankook Hospital, South Jeolla.

The Incheon helicopter control center finally received a call from Soya Community Health center at around 8:07 a.m. and made preparations to take off but canceled the flight after receiving word that Song had died.

Speedy transport to medical facilities is crucial in cases like Sohn’s, and his death has raised questions about the practicality of the government’s new air ambulance program, which was unable to help a man in a location it was specifically designed to reach.

In general, Doctor Heli only operates between 8:30 a.m. and 30 minutes before sunset. “As Doctor Heli is small in size, it can’t fly at night,” an Incheon City Government official explained.

The operating range of Doctor Heli is limited, too, and the helicopters can only reach areas within 50 kilometers (30 miles). This means that residents of Baengnyeong and Yeonpyeong islands cannot use the service.

Gil Min-su, a director of health policy for Incheon, said adjustments to the program would be considered. “We’ll discuss with the government expanding the operating time of Doctor Heli from sunrise to sunset and plan to establish a system of transferring emergency patients with helicopters from the Coast Guard and rescue services.”

But, of course, these measures are too late for Sohn, whose caregivers said the delays were detrimental to his care. “If the patient was transferred to a hospital on the mainland as soon as possible, we could have saved his life,” a staff member at the Soya clinic said.