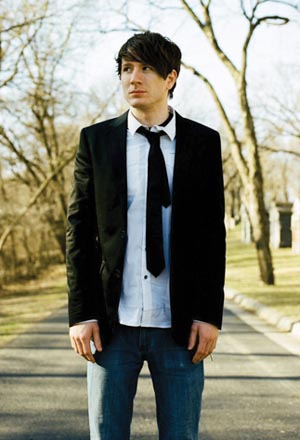 When audience members, covered in sparkling specks of glitter, walked out of Monday’s Owl City concert, they had warm, fuzzy grins as if they had just cuddled with a puppy or hugged a toddler. The uber-earnest lyrics written by Owl City’s main man, Adam Young, have earned some criticism in the United States for being just a bit too gimmicky, but they seemed a better fit for a Korean audience that took well to Young.

Lyrics like “You’re the bird and I’m the worm and it’s plain to see/ That we were meant to be” from “The Bird and the Worm” drew some of the most wholehearted cheers from the crowd, who waved glow-in-the-dark light sticks in unison in what seemed like a giant security blanket for the ever-so-innocent singer.

The 25-year-old Young played up his cutie-pie image, losing himself on stage while dancing in circles or sitting at his keyboard as if he were a computer nerd back in his mother’s basement, where he first started songwriting, and not center stage in front of hundreds of fans. He promised the audience “big hugs” and later went on talking about how he had to call his mom to update her on the concert.

When Young performed “Lonely Lullaby,” he sat alone on stage - obviously, to emphasize his loneliness - and the audience fell unusually quiet, listening as if they were about to hear some very serious news. One could imagine concertgoers collectively jumping on stage and giving a massive bear hug to the lonely Young.

Well-timed props added to the atmosphere. The audience defiantly threw glittery “dust” during the performance of “Dreams Don’t Turn to Dust” and sent paper airplanes zooming through the air and onto the stage during “Alligator Sky.” (Never mind that rapper Shawn Chrystopher, accompanying singer for “Alligator Sky,” wasn’t actually at the concert.) Artful light displays of purples, blues and strobes kept sync with the beat, too, and helped pump up the energy in the room.

If the atmosphere made the show, though, the actual music performance left a bit to be desired. Extended electronica interludes showed off Owl City’s prowess with the synthesizer that earned Young his fame. Pounding computerized tunes pumped through the speakers to set the mood but lasted too long. By the time the actual singing in a song started, the audience grew impatient. The music also overpowered Young’s voice, especially on the second floor of the venue, though hardcore synthpop fans might have actually preferred this arrangement.

As expected, triple-platinum “Fireflies” was the crowd favorite, with concertgoers welcoming it with roars after Young asked, “Do you guys have fireflies?” Loud guitar strumming and an intense vibrating beat marked an unconventional opening to Owl City’s now omnipresent debut single. But once the melody got going, the whole crowd joined in. Some read the lyrics on their smartphones, but most knew the words by heart and sang entire verses a capella without any help from Young or his accompanying instrumentalists.

All in all, this may not have actually been Young’s “favorite show,” as he said, but if he called his mother after the event, he would have had mostly good things to report.