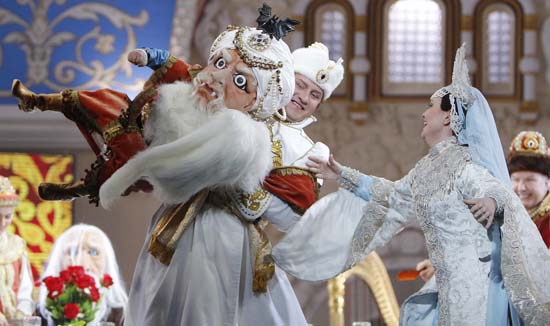 Actors perform during a final dress rehearsal on the main stage of the Bolshoi Theater in Moscow on Oct. 31. [REUTERS/YONHAP]


Russia’s Bolshoi Theater has provoked a scandal with the first production in its reopened historic home, which was booed and whistled by part of the opening night audience despite praise from critics.

The new production of Mikhail Glinka’s opera “Ruslan and Lyudmila” - a love story based on a poem by Pushkin - is the first in the restored Bolshoi Theater, which reopened with a gala last week after an agonizing six-year closure.

Russian director Dmitry Chernyakov makes no attempt to please traditionalists in his version of what some see as Russia’s national opera, which received its premiere on Wednesday night.

The opera opens in period dress and decor with a display of almost dazzlingly kitsch colors in a bright blue hall. It then transfers to modern times with elements including a Thai massage and a tattooed athlete.

At the curtain, several members of the audience yelled “shame!” and booed and whistled, an unusual outburst in Russia, which is unaccustomed to Italian-style displays of audience dissatisfaction with performances.

Some even shouted out their dissatisfaction while the performance was in course and the audience was considerably thinner after the interval. However other viewers also shouted “bravo!” in approval.

“When cries of ‘shame!’ are made after the curtain but are topped by the cries of ‘bravo!’ this means that a great cultural event has happened in Moscow,” Mikhail Shvydkoi, the Kremlin’s envoy for international cultural cooperation told the ITAR-TASS news agency.

Chernyakov said ahead of the performance that it was not his intention to create a scandal but that he was prepared for attacks from more conservative elements in the public.

“The subject is completely modern and the emotions will be as in real life,” he said.

However first-night critics largely expressed admiration for the performance, in particular the musical direction under the baton of star Russian conductor Vladimir Jurowski, who until now has largely worked abroad.

“It was a risky bet for the Bolshoi but a great success,” said the critic of the Kommersant Daily Sergei Khodnev. “The Bolshoi Theater has sent a message that it is not going to be stuck in tradition,” he added.

He said that under Jurowski’s direction the music sounded nothing like Soviet interpretations of the opera and was “lighter and more tense.”

Leading critic Pyotr Pospelov lavished praise on the musicians but said that the staging “went against the epic character of the opera.”

Despite the hardly unexpected controversy, the Bolshoi has had no problem selling out tickets for all performances of “Ruslan and Lyudmila” at the lavishly-restored theater.

The only way to find a seat is to find a ticket through a specialist agency or black market touts, which could cost up to 25,000 rubles ($800), according to the Russian media.

The first full-length ballet at the reopened theater will be the premiere on Nov. 18 by Tchaikovsky’s ballet “The Sleeping Beauty” in an updated production by the legendary former Bolshoi ballet supremo Yuri Grigorovich.